Tardy service, not attending to complaints and walking around in slippers are allegedly nothing new at the Mamelodi East police station. 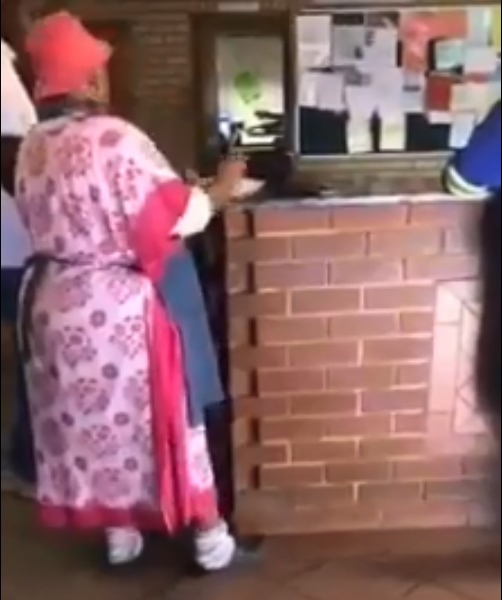 An SAPS employee certify documents while dressed in slippers and an apron at the Mamelodi East police station. Picture: Supplied

Police are nowhere to be found in the Mamelodi East police station charge office, according to the caption for a video that went viral yesterday.

The video showed a woman in a dress, slippers and an apron certifying documents at the front desk.

???? Hi @SAPoliceService…Yesterday Mamelodi East PTA.
Police are no where to be found in the Charge office
The Mama selling fat cakes is Certifying document..#OnlyInSouthAfrica pic.twitter.com/zntM9dEJIs

According to Stolen Cars RSA, which posted the video on Twitter, the woman was a “mama selling fat cakes”.

However, she was actually an employee of the police service and was indeed authorised to certify documents, police spokesperson Brigadier Mathapelo Peters said.

But her mode of dress depicted “unprofessionalism”, Peters added.

“The manner in which the woman was dressed while rendering services to the public was inappropriate and cannot be condoned,” he said. “The matter will be addressed with the employee.”

Residents in the areas, however, say poor service at the police station is nothing new and waiting at least 30 minutes to be helped is the norm.

Lindiwe Makua said she waited for 45-minutes to receive an affidavit form as police were taking their time to assist members of the public.

“I had lost my phone and all I wanted was an affidavit. Even though there was a queue, the officers behind the desk were delaying and taking their time to help us. When I finally got the form, I wasn’t guided on how to complete it. I had to constantly try and ask someone for help.

“That police station is a government institution and should consider people first before doing anything else. You can’t count on them for things. They are too relaxed,” she said.

Residents who have called police officers to the scene of a crime in the area have also complained.

Another resident, who wished to remain anonymous, said she contacted the police about domestic violence in a neighbouring house earlier this year, but the police did not do anything of use.

“I am not happy with their service,” the person said emphatically. “We called them because a man was abusing his wife. When they came, they said they can’t do anything because the wife would probably withdraw the case the following day anyway.

“I have never been so disappointed in the police. Now, I don’t call them for anything.”

“This is the context within which we remain purposeful in enhancing all frontline service delivery points towards regaining public confidence and strengthening relations between the police and the public.”