The ANC says this leaves Johannesburg employees to deal with Mashaba on their own. This apparently on account of Salga’s dereliction of duty to the City.

Executive mayor Herman Mashaba said the association is politically aligned and negligent of its members.

“Following the 2016 Local Government Elections, the country experienced a shift in political leadership across numerous municipalities, including three of the largest metros. The membership structure of Salga – which affords one seat to each municipality – is however not proportional to the population of each municipality,” he said.

He also claimed that despite numerous efforts wherein the city called upon the association, Salga failed to support the city in legal matters regarding union disputes. Mashaba also claimed that Salga is still in communication with old shop stewards and office bearers and that this undermines the election of new people in these roles.

“The failure to engage the city in good faith, and on an ongoing basis, undermines the city’s position and generally serves to comprise municipalities’ planning processes.”

Salga was unable to comment immediately. But the ANC caucus in Johannesburg said it is appalled by the council decision.

“The decision is ill-informed and most importantly it is an attempt by the DA-led coalition to destroy years of hard work to unify the local government sector in South Africa. In its motivation for Joburg to move out of Salga, the DA makes an assertion that Salga is an extension of Luthuli House and the ANC’s cash pipeline. This is far from the truth,” the party said in a statement.

The party and the decision has put the city and its employees at risk. The statement continued: “The decision basically means that city employees are now outside of the Local Government Bargaining Chamber. The workers will henceforth be vulnerable to abuse by the DA-led coalition whose interests are for the free market forces and anti-workers. Joburg workers will now have to negotiate their benefits and conditions of service with Mashaba, a self-proclaimed capitalist whose stance is anti-poor and anti-workers.”

On the union matter, the ANC said Salga does not have the mandate to interfere in internal union rumblings.

“[Union] problems were exacerbated by Mashaba who chose to take sides with one group in the union at the expense of the other group.”

The ANC in Joburg said they will now take up the matter with relevant authorities and implore unions to defend their rights and platforms for collective bargaining.

Mashaba first said he would withdraw funding to Salga in October 2016. By December 2016, it was announced that the City was to remain a member at around R12 million a year. 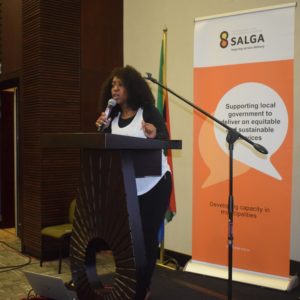