The officer in the video appears to have lost his gun after he was found sleeping behind his trench coat. 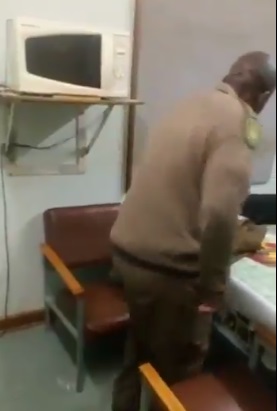 The Department of Correctional Service (DCS) is appalled by a video of a “plastered” officer found sleeping on duty with a misplaced firearm.

A video of the officer surfaced on Wednesday showing the DCS officer sleeping behind his jacket while on the job. An official who is believed to be his senior wakes up the officer, only to find the officer intoxicated.

The official then relieves the officer, only to notice the officer’s firearm is missing.

The officer continues to say the firearm was there, pointing to the table as he searches.

“A service delivery charter clearly defines what is expected of a correctional official and how one ought to behave in the line of duty. The mandate of the department of correctional services is to contribute towards a just, peaceful, and safer South Africa, and that demands that our officials must maintain a sound state of mind and be professional in performing their duties.

“This matter will be fully investigated and the department condemns this type of behaviour in the strongest possible terms.”