The mayor has suggested the council speaker was lying when he said she'd written a resignation letter to the city. 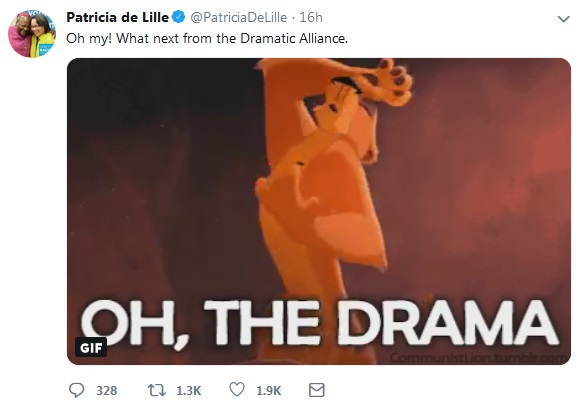 The clock is ticking as the country awaits whether Cape Town mayor Patricia de Lille will resign, as announced months ago, or stay on as mayor.

The mayor has been active on social media querying why there appears to be so much drama around her in the Democratic Alliance, which she redubbed the “Dramatic Alliance”.

Oh my! What next from the Dramatic Alliance. pic.twitter.com/kM1CfdJe2d

She is set to announce if she will stick to a letter she wrote to DA leader Mmusi Maimane expressing her intention to resign as mayor of the city.

She last week appeared to backtrack from that letter of August 4.

She took to Twitter to question council speaker Dirk Smit on Tuesday for allegedly telling journalists she was expected to vacate her office.

In her tweet, she said she never sent any letter to him. She was responding to questions from a journalist asking her why Smit was telling journalists that she had tendered her resignation and planned to vacate her office.

“A special council meeting will be held soon to elect a new mayor,” the tweet read.

I just sent a message to the Speaker, asking him why he is lying to journalists. pic.twitter.com/xC5cfp5nSL

She also publicised her letter to Maimane as proof that the speaker was supposedly lying.

A version of a Bowmans report found De Lille liable for allegedly attempting to interfere with city manager Achmat Ebrahim’s duties. The plot thickened after  a close friend and confidant to De Lille, Rodney Lentit, alleged last week that the report was an attack on the mayor.

Lentit believes the Bowmans report was deliberately leaked while De Lille was at a summit in London. He accused the DA of attempting to discredit her.

He advised her not to write a formal resignation letter to the city and that she must stay on as mayor for an internal disciplinary hearing. He added that if De Lille were to leave at the end of October, there would be no opportunity to have a disciplinary hearing, leaving her name tainted.

An earlier report by the Sowetan alleges De Lille spoke to Lentit and would cling to her post in the mayoral office.

Mxolisi Kaunda: Who is eThekwini's new mayor?
2 days ago
2 days ago

Mxolisi Kaunda: Who is eThekwini's new mayor?
2 days ago
2 days ago