‘Filthy’ Tshwane Fresh Produce Market to get a spring clean

But agents are still worried about long-term maintenance. 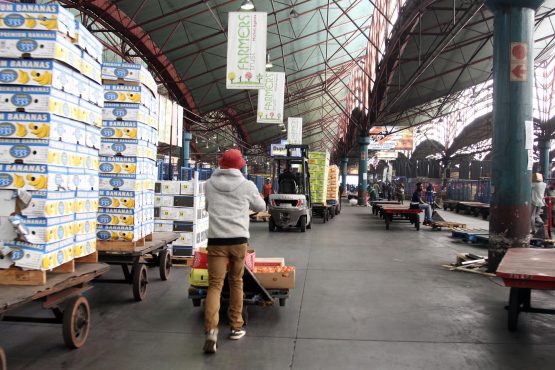 A worker pushes a trolley full of produce on the dirty trading floor of the Tshwane Fresh Produce Market. Picture: Moneyweb

The City of Tshwane has appointed a service provider to deep cleanse its Tshwane Fresh Produce Market where years of filth and grime have become a health hazard.

Moneyweb reported in July that big buyers, including Food Lover’s Market, had stopped buying produce from the market due to the filth and state of disrepair.

This despite the fact that the market generates R12.5 – R15 million per month or R150 – R180 million per annum for the city through commission on all products sold.

Linda Jackson, director at consultancy Food Focus SA, says that although recent research has shown the probability of an outbreak of listeriosis or similar due to the filth to be smaller than earlier thought, the impact in the case of the Tshwane Fresh Produce Market would be huge.

The market is the second biggest of its kind in South Africa. It links farmers from all over the country to consumers in the whole region, including countries like Botswana, Zimbabwe and Zambia.

Although the City of Tshwane has flatly refused to answer any of the questions Moneyweb has put to it about the intervention, we have been able to establish that some progress has been made.

The number of workers sweeping the trading floors has been increased and a street-sweeping machine is going through the market daily. Stormwater drains have been cleaned, and big waste skips are being emptied daily.

Most potholes have been fixed, the lights and generators have been repaired, and the grass has been cut.

During a visit to the market this week, Julian van der Nat, speaking on behalf of agents active at the market, showed Moneyweb that conditions in the watermelon section, where the general repairs started, have already improved markedly.

It was clear that security at the market has been upped, but there was still no strict access control and, generally speaking, the premises is still extremely filthy.

Cleaning company Babore Gauteng will start on Monday with a deep cleaning of the market, which includes the walls, ceilings and light fittings that are currently covered in cobwebs.

Moneyweb has learnt that the company will use solutions that will deter spiders, rats and mice in future.

Van der Nat says while the industry appreciates the effort, it is concerned about the long-term maintenance of the market. “This cannot be a once-off,” he says. “You have to follow it up with a regular programme of cleaning and maintenance.”

Moneyweb has established that the Babore contract is only for six months, but has been told that the city is in the process of procuring long-term cleaning services.

During our visit, we noted that the fire hydrants were last serviced in 2015. Some are situated in areas designated to market agents who lock the gates to their sections after trading hours. These hydrants would thus not be accessible in the event of a fire.

We have learnt that the city has, however, completed a fire audit and will start replacing the fire hydrants by the end of this month.

We also established that the rodent stations were last serviced in 2014, when the contract of the previous service provider came to an end. It is not clear whether this will be addressed as part of the intervention.

Van der Nat expressed his concern about the lack of occupational health and safety measures at the market. There are no designated lanes for forklift trucks – it really is a matter of pedestrians dodging fast-moving forklifts loaded with wooden pallets full of boxes of fruit and vegetables.