According to the Public Servants Association, the fourth and 15th floors of the South Tower were also damaged, leaving live cables exposed to water. 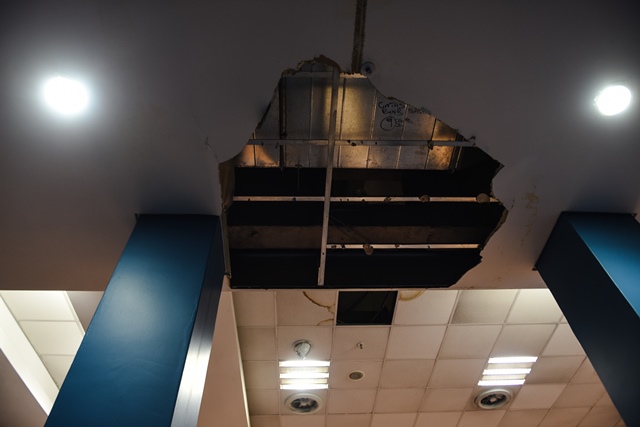 Leak damage that is not being repaired inside the national department of health's Civitas building in the Pretoria CBD, 6 September 2018, Pretoria. Picture: Jacques Nelles

The Civitas building has been making headlines recently, with staff claiming it is a health hazard and does not comply with health standards.

According to the Public Servants Association (PSA) leader at the department, Peter Moloi, the fourth and 15th floors of the South Tower were also damaged, leaving live cables exposed to water.

“Even the parking in the basement is flooded. Parts of the ceiling collapsed on chairs and computers. Imagine if people were inside. It was going to be a disaster then,” Moloi said.

For the past months, staff have been working from the foyer of the building on Thabo Sehume Street, refusing to enter the building further, as it made them sick.

Last month, the labour department issued a prohibition notice following inspections, flagging the ventilation and fire sprinkler system. But the health department has appealed the prohibition, calling on staff to return to work.

Moloi said following the rain damage, staff had not been informed of any alternative arrangements, but were instead moved to the boardroom to continue with their duties.

“It’s illegal to ask people to come to the office when the building clearly needs to be fixed. We will still sit in the foyer until someone comes to tell us that the building is safe.”

The ceiling collapse was apparently due to a contractor removing the building’s waterproofing without notifying the department, health spokesperson Popo Maja said. “The contractor will be held responsible for the damage caused on the floor by rain water.”

He insisted the Civitas building was “largely safe” and all affected staff would be accommodated.

“Fortunately, there was no electrical damage but severe damage to the ceiling and carpet.

“The eighth floor has been decommissioned. There is enough space to accommodate affected office and staff,” said Maja.