An aggressive man can be seen beating the car windows of a father and daughter in a video that has gone viral. 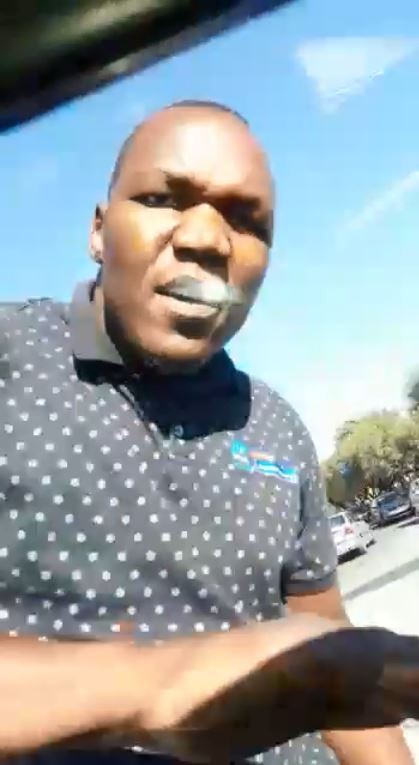 A screenshot taken from the video of a road rage incident that went viral on Wednesday.

One suspect has been arrested after video of an aggressive road rage incident involving two men against a man and his seven-year-old daughter went viral on Wednesday, reports Randburg Sun.

Honeydew Police Station spokesperson Captain Balan Muthan confirmed on the evening of 29 November that a suspect had been arrested in connection with the incident.

A case of intimidation has been opened at the station.

ALSO READ: WATCH: Aggressive man tries to attack motorist with child on board

eBlockwatch’s Andre Snyman said, “Well done to the Honeydew police, the Honeydew CPF and the ever-present Councillor and MMC for Public Safety Michael Sun … A special thanks to Troy, our fantastic eBlockwatch member who assisted eBlockwatch mobilise the amazing Brigadier Mirage at the Honeydew Police.”

The video was initially shared on Facebook by Florence Dambuza-Kgoleng.

In the video, a man can be seen violently hitting the windows of her husband’s car stopped in Aureole Avenue.

Her seven-year-old daughter can be heard crying and screaming in the background, startled by the situation.

Halfway through the video, the man can be seen moving to the boot of his bakkie to retrieve a tool to use as a weapon.

Her husband tries to escape in his car several times before successfully fleeing the scene.

Dambuza-Kgoleng said on Facebook, “This [barbaric] man attacked my husband and seven-year-old daughter this morning on their way to school. This man threatened their lives, with no care in the world that a child is inside the car.

“He is not even moved by the fact that he has been captured on video. He followed them to school after the video was taken. My husband had to drive inside the schoolyard for safety. This cannot go unpunished please help to make this sick man go viral and may the Long arm of the law deal with him on #16daysofactivism.”

Dambuza-Kgoleng told the Randburg Sun that her husband called the police after arriving at his daughter’s school, but that they didn’t show up.

“We went to the Honeydew Police Station and a case has been opened.”

Snyman said, “The victims have had trauma counselling and eBlockwatch will be signing them up to our community panic button.”