The DA-led government is opposed to the name change on the basis of cost and that it currently isn't offensive in any case. The Joburg City Council on 29 November adopted a motion to rename Sandton Drive after Leila Khaled.

Martin Williams, Ward 90 councillor, posted a statement on the Ward 90 Facebook group that read: “… The DA were outnumbered when the EFF and ANC voted together.

“As an affected ward councillor, I undertake to ensure adherence to correct policies and procedures. The people of Ward 90 shall have their say.”

The statement read that a motion was tabled in council to move that the city rename Sandton Drive to ‘City of Ramallah’ Drive.

A further amendment to the motion was tabled and accepted, calling for the motion to rename the road after Leila Khaled, a member of the Popular Front for the Liberations of Palestine, said the statement.

Mashaba further said in the statement: Therefore, the nature of the motion was substantially altered. It is the view of the DA that, in this case, the motion would need to return to the Programming Committee for review and then serve at the next council meeting. 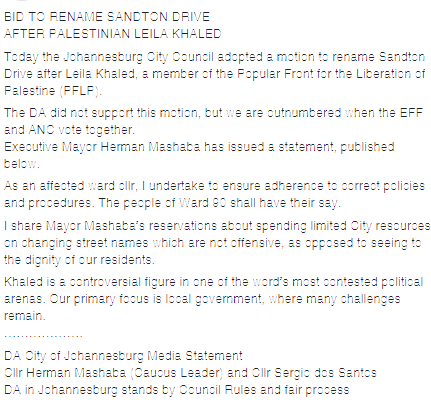 Mashaba said that the DA voted against the motion purely because there was a naming and renaming policy in the city, which must be followed.

“According to this policy, all implications must be considered when seeking to change the name of a public space, such as a road. This includes public consultations and cost implications, which can be significant in a case such as this.”

The statement continued that the DA-led administration had inherited a R170-billion backlog and more than 200 informal settlements where the needs of residents were desperate, including not having basic services such as sanitation.

“How do we justify spending our limited resources by changing street names which are not offensive, as opposed to seeing to the dignity of our residents,” Mashaba said.

He said that, under these circumstances, they believed every cent needed to be used to advance they residents as a priority.

The EFF Joburg Regional chair Musa Novela confirmed in a statement issued on Twitter that the party supported the renaming of the street.