Former Bok captain Pienaar is giving back to SA

Named after a promise Pienaar made to Madiba, the Make a Difference (MAD) Leadership scholarship programme focuses on producing all-round leaders. From leading his team to victory in the 1995 Rugby World Cup and leaving his footprint on the country’s rich history, Francois Pienaar has new goals now – to find new leaders who will take the country to new heights.

It was nothing less than a lunch date with late father of the nation Nelson Mandela that provided the motivation he needed to start the Make a Difference (MAD) Leadership programme, a scholarship programme focused on producing all-round leaders.

Pienaar said he has been involved in giving back to the community as far back as 1993 when he became aware of issues surrounding cancer and children.

“My mentor and captain of the team at the time had cancer for 18 years. It was through him that I got involved with cancer and children,” said Pienaar.

After his abrupt parting from the South African rugby team in 1996 and his relocation to the United Kingdom, he was pleasantly surprised by how the English seemed to have a “DNA of giving back to the community”.

He said they would set up fundraisers as often as every weekend where people would always give generously. This spirit of giving back and the conversation he had with Madiba were the fuel he needed to come back home and plug into the community.

“Before going overseas I got an invite for lunch from Nelson Mandela and Graca Machel. I went with my wife and we felt extremely honoured to be visiting them. After the lunch Madiba took me aside and he made me promise that I would come back and make a difference in the lives of South Africans. It stuck with me and I told myself that I would come back and do just that,” said Pienaar.

He said he had a close relationship with Madiba and learned so much from him. 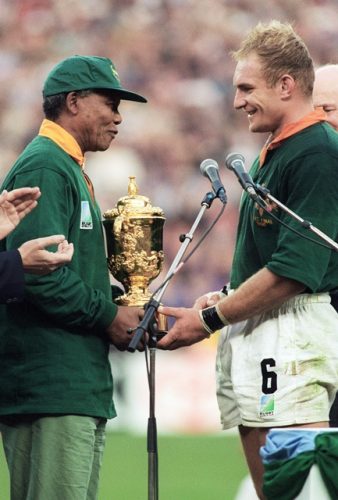 Two of the most important things he learned were humility and selflessness from the way Mandela sacrificed personal family time and energy to build a country that surprised the world.

He said it was always important to learn from leaders; to observe their incredible journeys in which they did something extraordinary and how they interacted with people.

His dream to build an army of leaders started in 2003 when he founded the MAD leadership programme with a group of friends with the intention to produce more leaders, greater leaders and young leaders who were hungry to help their community but lacked the resources.

“When I came back from the UK, I met with friends for lunch and we discussed the challenges we felt the country was facing. I challenged them to come up with ideas on how they felt they could contribute to the country’s problems and we all came up with education and youth leadership.

“That was when MAD was started. The leader programme was just known as MAD for a long time. Until recently, I didn’t tell people that I had named it after the promise I made to Mandela.”

The leadership programme allows for South Africans as young 13 to apply. The applicants go through a crucial vetting process before being selected as a “leaders”.

The programme would then take up all academic responsibilityy for the child, from getting into the best schools to getting the right mentors, tutors and other additional needs.

The number of people selected each year varied depending on the funding they received.

The programme currently has 300 “leaders” still studying and 45 graduates who had all gone on to be successful in their various disciplines.

“We make sure we take the child through their whole schooling journey and we have a multi-disciplinary team that helps our leaders prepare for life outside formal school, university and then eventually the workplace. We find that no short-term intervention really works so we believe that being in their lives in the long term is sustainable and makes a difference,” said Pienaar.

They placed the benchmark as low as 65% and gave the applicant a series of tests during the vetting process which would reveal their true potential.

“There are a lot of young leaders in South Africa in every town … young leaders who just need the support and opportunity to help his or her community. I believe that if we start focusing on giving these leaders the opportunities, South Africa will be surprised about what happens in the future,” said Pienaar.