The NSPCA said that unless the animal suffered when the sacrifice was made, they are only able to act within the parameters of the law. WARNING: THE FOLLOWING IMAGES ARE NOT FOR SENSITIVE VIEWERS A prophet from the Ambassadors of Christ Gospel Ministries church in Seshego, Polokwane has come under fire for feeding his congregants dog meat as communion, reports Polokwane Review.

In a post that is now gaining momentum on social media, photos of a slaughtered and skinned dog can be seen and the meat being cooked before being fed to the congregants.

The photos were shared by a member of the church, who stated that the congregants are still going to eat what the world has rejected, because “we are out of this world”. The post reads: “1Timothy 4, Paul says everything that God created is good and nothing is to be rejected if received with with thanksgiving.”

NOTE: The following images are graphic and disturbing. Viewer discretion is advised. 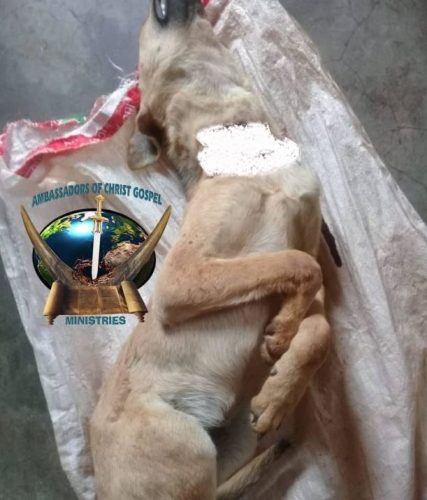 On 16 May, Prophet Penuel released a statement on his Facebook page stating he was not afraid to speak out, and that he knew who was involved in plots against him.

“That’s the reason why I am not afraid to even speak about these dogs, who seem to be pillars of Gospel … Anyone who needs my fingerprints, must be done publicly before everyone, including my media team. I am a public spectacle and every single thing that I do, must be recorded and captured on cameras. When the Holy Spirit allows me to play it publicly, I will do it without fear.

“At this very level where I am, it is not safe for anyone to capture my fingerprints for their own plans and benefits. The moment they fail to attack us in the spirit, they would rather frame you into fraud. If l have to go to jail, let it be the will of God not of man or these earthly pastors who do not even know their authority in Christ,” his statement read. 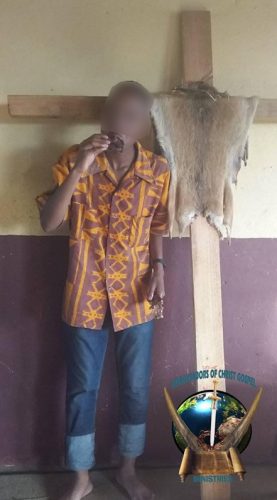 In the comments section of the Facebook posts, congregants commented saying the meat was “delicious”.

The National Council of SPCA (NSPCA) told Polokwane Review that they are aware of dog meat being fed to congregants at a church in Seshego, and that the SPCA is only able to work within the parameters of the law.

The NSPCA’s public relations officer, Meg Wilson said that although the NSPCA understands the public’s outrage regarding the incident, this is not the only case where an animal is slaughtered for religious or cultural purposes.

“Farm animals are regularly slaughtered in the name of religion and culture. The question to ask in any sacrifice ceremony is, did the animal suffer? If any animal suffers before or during slaughter, it is unacceptable and a contravention of the Animals Protection Act. All animals matter to the NSPCA,” she said.

When asked what the next step for the NSPCA would be, Wilson added that they are only able to work within the parameters of the law.

“If there is any evidence that the dog was slaughtered inhumanely, or suffered in any way, be it before or during the slaughter, witnesses need to come forward with this in order for appropriate action to be taken,” she said.

Polokwane Review contacted police spokesperson Col. Moatshe Ngoepe, who said the police were not aware of the matter, but urged anyone affected by the dog meat to come forward and report the matter to police so they are able to take it further.