Tokollo Dlamini: Teenager with a drive for life

The humble and kind-hearted Kempton Park 12-year-old is a winner, who in a demonstration game hit her drive way further than President Cyril Ramaphosa. There are not many 12-year-olds who can say they have beaten President Cyril Ramaphosa at anything. But Tokollo Dlamini – a budding golf star – is one.

During the 2019 State of the Nation proceedings in Cape Town in February, Dlamini showed off her golf skills as she took on Ramaphosa in a demonstration mini-game.

And even for a man who famously takes a long view of life, Ramaphosa was no match for Dlamini’s long game … her drive went way further than his.

She remembers the event as “an amazing experience”.

She said: “I enjoyed myself, but when I got introduced to the president I was so nervous to a point where I cried.”

Her mother, Linah, said the president wanted to adopt her and help her with funds, adding that he was very fond of her daughter.

Linah, a single mom, works as a waitress at the Kempton Park Golf Club – and that is how Dlamini got into the sport.

Wanting a way to keep her daughter off the streets, Linah introduced the girl to golf when she was just eight.

Dlamini said she knew nothing about the sport but the more she spent time there, the more her interest grew. 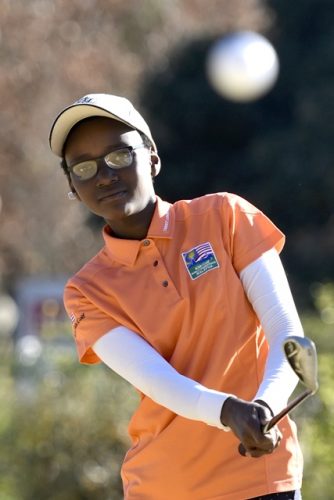 She started entering competitions at the age of 10 at a SA Kids Golf tournament in Germiston and that was the start of her success in the sport. She won competitions at Blair Atholl, Emfuleni and Vaal de Grace golf estates. She was also chosen for an international tournament in Malaysia, but that did not go well as it was too hot and she became ill.

The Kempton Park Golf Club has taken in about 40 youngsters from across Ekurhuleni and is teaching them the basics of golf. Funding for this programme comes solely from members of the golf club.

Club captain Hannes Beeslaar and chairperson Gregory Kruger have taken a particular interest in Dlamini and her game. They are both impressed by her progress … but things would be much better for her and others in the programme if the government would chip in with funds.

Ironically, the club is on government property – but no one in authority has responded to their calls for help.

To keep the club running, including the kids’ programme, they will need at least R1 million, said the two men.

Kruger said he had become fond of Dlamini, who is humble and kind.

“In my heart she is like my daughter” said Kruger.

He said as much as they were proud of her achievements in golf, they also encouraged her to put equal effort into her school work, so she is currently taking extra classes.

Because of her success in academics and sport, Dlamini has been bullied by jealous schoolmates. She said they’ve been saying harsh things to her, wishing her mother dead and that she won’t be successful in future.

The bullying got to a point where one of the boys in her class tried to strangle her.

Her mother is deeply hurt because the school is not helping to keep her daughter safe. She said the bullying affected Dlamini badly as she became aggressive at home … but Linah still encourages Dlamini to remain humble and kind-hearted towards her fellow pupils.

Dlamini’s warm-heartedness did rub off on one of her bullies and that boy has also become interested in playing golf .

The pre-teen is also into modelling and has won modelling awards for the past three years.

Dlamini said when she grows up she wants to be the first black woman to design a golf course, something she would use to keep other children off the streets. She would also like to be a doctor – an ambition motivated by her mother, who has arthritis.

Linah is proud of her daughter who hopes she keeps on excelling and doesn’t lose focus.