The initiation of the strategic plan was reportedly abandoned when the Tshwane metro was placed under administration in March. 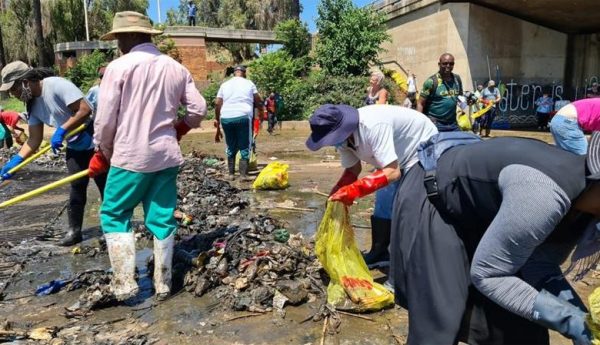 A strategic plan to tackle the Hennops River pollution problem that was put on ice earlier this year, was to be re-initiated, the Tshwane metro said at the weekend.

As another Hennops clean-up operation was held at the weekend, Tshwane mayor Randall Williams said the need for a sustainable plan to combat the spread of pollution in the river had to be re-initiated.

Williams said the strategic intervention, which was allegedly abandoned when the metro was placed under administration earlier this year, would entail building a litter trap at the weir to capture waste and ensure it did not pollute the river.

This intervention was the third after the metro, in February, opened the weirs of the Centurion Lake to allow the free flow of water and started removing “hundreds of tonnes” of accumulated silt from the lake.

Williams, however, explained that re-initiating the plan would require increased inter-governmental relations as the “vast majority” of waste at the river came in from areas south east of the city in Ekurhuleni and the city of Johannesburg.

“To this end, I will prioritise engaging with the mayors from both cities so that we can collaboratively focus on interventions to minimise the waste at its source,” he said, adding that pollution had been a “major environmental threat” to the river for several years.

“At one point, an assortment of plastic and polystyrene formed a solid island of trash floating in the river,” Williams said.

He said another contributory factor to the river’s deterioration was the raw sewage spillage from the waste water treatment works in Olifantsfontein.

This had also caused serious contamination of the Centurion Lake.

Despite the number of problems the metro faced to tackle the pollution, Williams extended his gratitude to the Hennops revival non-profit organisation (NPO) for their continuous work and remaining steadfast in protecting the river and safeguarding the environment.

Hennops revival is an NPO focused on restoring and healing the river while collaborating with, among others, government, the private and public sectors along with other NGOs and NPOs.

Williams was joined by the metro’s environment and agriculture management MMC Dana Wannenburg at the clean-up.

The Hennops revival founder Tarryn Johnston said the clean-up was “absolutely incredible” and they had a fantastic turn-out with a total of 1 034 bags of waste estimated to weigh 25 850kg removed by the 79 volunteers, who included the Cetric foundation, homeless people, local ward councillors and residents.

Johnston said the clean-up was a continuous campaign and more funds were needed to sustain and keep the river clean.

She said the clean-up started in September 2019, and that they had, thus far, managed to collect 880 tonnes of waste which polluted the river.

“The clean-up campaign is held almost every two weeks, depending on the rain,” she said.

“We need to keep our river clean at all times, and to succeed, we need to stop littering.

“Water is life. Without water we cannot survive,” Johnston said, explaining that while they were repeatedly told to tackle the problem at the source, it was not a destination.

“Even if it was a destination and everything could be stopped at one point, there would be a mountain of issues right there – social and rural development; waste management; housing; education; industrial pollution; sewage and sewage systems; service delivery; encroachment of wetlands; corruption; poverty; inequality; overpopulation; political will; unconscious consumerism and apathy are all part of, but not limited to, the source,” she said.

Cetric Mphofela of Cetric foundation said this was not the first time he took part in the clean-up campaign.

He said the community members needed to know, especially, those living near the river, that it was not a dumping site.

“Water is life and they must stop littering and keep our environment clean and healthy at all times,” said Mphofela.