The area about 5km upstream towards Robertson and 5km downstream towards Swellendam remains the key area for surveillance and capture. 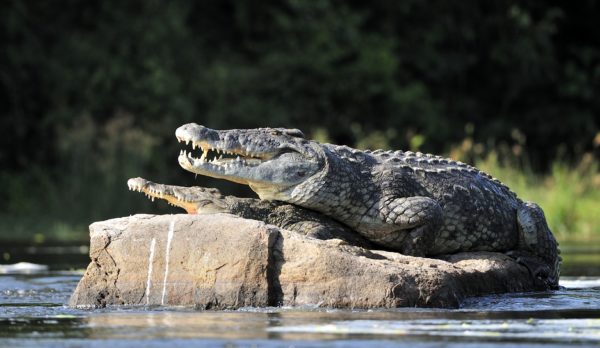 Two crocodiles , having opened from a heat to graze, sit on one big stone. Picture: iStock/ USO

Fifty crocodiles have been recaptured after escaping from a Bonnievale farm last week, but an unknown number are still on the loose.

The sub-adult Nile crocodiles escaped from a facility outside Bonnievale in the Western Cape on Wednesday morning.

CapeNature spokesperson Petro van Rhyn said crocodiles were still being spotted in the Breede River. She added that the recapture operation would likely continue until there were no more sightings of crocodiles in the area.

“We’re sure about where they are. We will continue with night patrols until there are no more sightings. We are currently still having sightings, but the crocodiles are very difficult to catch,” she said.

ALSO READ: At least 90 crocodiles still at large after escaping from Mpumalanga dam

The area about 5km upstream towards Robertson and 5km downstream towards Swellendam remains the key area for surveillance and capture.

The crocodiles are very shy and have ample reeded areas to hide in, Van Rhyn added, making the recapturing operation a challenge.

The South African Police Service has availed four boats and eight police divers to assist in the nocturnal search for the escaped animals.

“A number of humane cages with bait were put out in a first attempt to recapture the animals. This method however proved to be less effective. The animals have access to an abundance of food in the river and hence they do not need to hunt for food,” Van Rhyn said.

“The overgrown river and dense vegetation on the riverbanks also make it very difficult to recapture these crocodiles. As time is of the essence, CapeNature and the search party partners were left no choice but to euthanise seven of the crocodiles spotted.”

The public has been urged not to attempt to approach any crocodiles, but to immediately report any sightings to the Bonnievale police on 023 616 8060.