The handing over of the R34 billion Moloto Road and rail project by the transport department to the Passenger Rail Agency of SA (Prasa) has signalled the first ray of hope for commuters along the “road of death”. 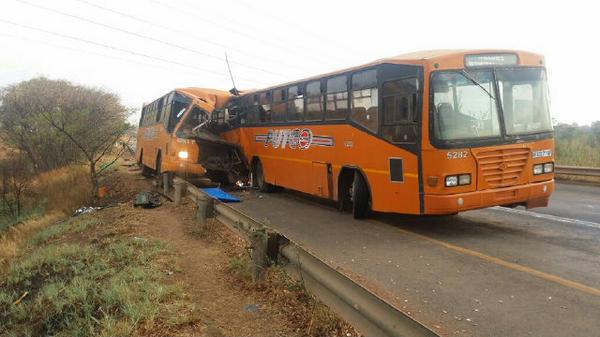 The driver of the bus that rear-ended the stationary bus had been killed in the crash. Pic: @GTP_Traffstats on Twitter

Last week, Transport Minister Dipuo Peters urged residents to “be patient”, after a decade-long delay in implementation of the project.

The department said the Moloto Corridor Development Feasibility process had been initiated to improve the public transport and the “endless challenges experienced by commuters on a daily basis”.

“The initiative is also targeted to reduce traffic congestion and to curb continuous road carnages. The project forms part of government ‘s delivery of infrastructure which has a high economic impact and benefits for the country,” the department said.

Peters had been joined by Mpumalanga Premier David Mabuza and Gauteng transport MEC Ismail Vadi for the official hand-over of the project.

This after a man was killed and 42 people sustained various injuries in a bus accident on the R573 Moloto Road last week.

#Putco busses are so rubbish they're taking each other out. Moloto Road in PTA this morning. 42 injured. 1 killed pic.twitter.com/EOIYDSEXFr

Tshwane Emergency Management Services (EMS) spokesperson Johan Pieterse said one bus had collided into the back of another which had broken down, according to eyewitnesses.

Independent forensic investigators had been instructed to examine the scene of the bus crash, according to the Public Utility Transport Corporation (Putco).

The notorious road, which links Pretoria and Mpumalanga, carries hundreds of buses with an estimated 35 000 passengers daily.