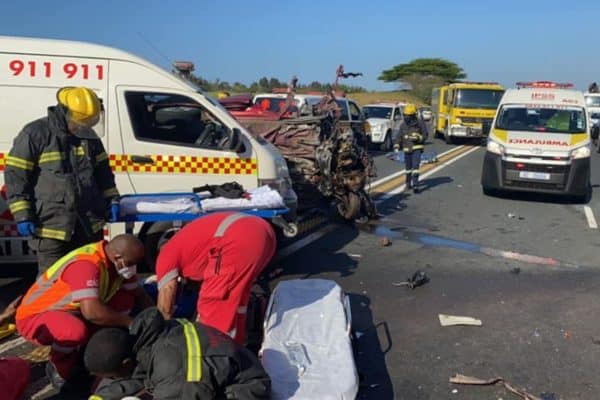 As reported by Arrive Alive, three people were killed in a multi-vehicle collision on the N2 between Stanger and Zinkwazi in KwaZulu-Natal on Saturday. Goods were also looted from the accident scene.

IPSS Medical Rescue teams were dispatched to the scene where multiple vehicles were involved in a collision with a beer truck. Of the seven people involved, three were killed and two patients were critical.

It is believed one vehicle overtook multiple vehicles before losing control and colliding with the beer truck.

“IPSS Medical Rescue advanced life support paramedics, together with other emergency units, were working to manage the scene”.

However, rescue personnel say their efforts were “being hampered by looters who were ridding the truck of its cargo”.

Meanwhile, in an unrelated incident, looters targeted an SAB truck when it lost its load of more than 30 000 litres of beer on the Golden Highway in Devland, Gauteng on Friday.

The truck was reportedly on the way to Kimberley from the Alrode Depot when it lost its load.

According to Arrive Alive, the smartest piece of legislation in recent years has been the requirement to add reflective strips at the back of trucks and trailers.

In addition, laws requiring mandatory daytime running lights can reduce the incidence of daytime crashes of four-wheeled vehicles by 10–15%, while it also reduces pedestrian and cyclist collisions.

High-mounted brake lights, positioned on the back windscreen of cars, increase their visibility. The use of these brake lights has led to a 15–50% reduction in rear-end crashes.

Cele to unrest inquiry: I don't recall seeing top cop Sitole in the 'right places'
2 days ago
2 days ago
PREMIUM!

Cele to unrest inquiry: I don't recall seeing top cop Sitole in the 'right places'
2 days ago
2 days ago
PREMIUM!