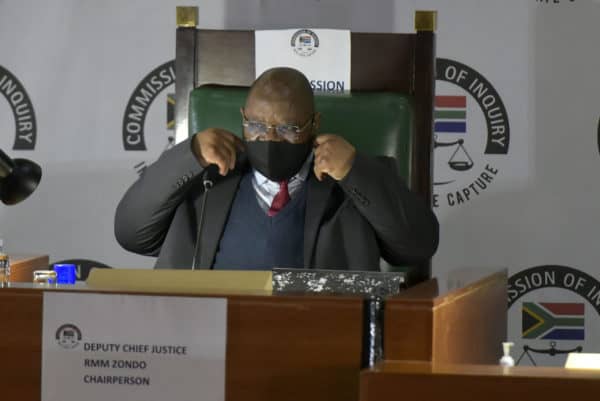 Zondo commission asks for yet another extension

The Commission of Inquiry into Allegations of State Capture has launched an urgent application in the North Gauteng High Court for yet another extension.

Chairperson of the commission, Deputy Chief Justice Raymond Zondo reportedly wants the hearings to be extended until 31 December.

The commission is expected to hand over its report to President Cyril Ramaphosa.

The state capture commission’s urgent application comes as the Constitutional Court (ConCourt) is expected to deliver its judgment on former president Jacob Zuma’s application to rescind the contempt ruling made against him.

The Constitutional Court will on Friday hand down its judgment on Jacob Zuma’s application to rescind the contempt finding made against him.

Back in July, former president Jacob Zuma filed an urgent application with the Constitutional Court (ConCourt) for the rescission of his contempt conviction and 15 months imprisonment.

Now, the ConCourt will rule on his application on Friday, where it will either set aside his contempt of court conviction or uphold it.

Nomia Rosemary Ndlovu, the policewoman accused of orchestrating the murders of her boyfriend and five family members to cash in on insurance policies, has continued with her erratic behaviour during her trial as she threw food at journalists on Thursday.

Ndlovu’s behaviour during her trial has shifted from animatedly posing in front of photographers, cracking jokes with journalists, crying about her murdered boyfriend, and even showing her buttocks to onlookers.

On Thursday, however, Ndlovu’s mood seemed to sour as she hurled items at members of the media while she was leaving the Palm Ridge Magistrate’s Court.

After eight years of fighting cancer, former The Citizen court reporter Ilse de Lange passed away in hospital on 15 September 2021.

According to her husband, Fred, Ilse was first diagnosed with cancer in 2014.

“She went through about 11 rounds of chemotherapy,” said Fred. “In the end, she suffered a bit. The last three weeks she really did not have a good time.”

Ilse first joined The Citizen in 1981/82 and rejoined in 1986, where she stayed until 2019 when she retired as medically unfit.

Over one million at risk of losing their outstanding TERS payments

The Unemployment Insurance Fund (UIF) says it has more than a million outstanding claims on its Covid-19 Temporary Employer-Employee Relief Scheme (TERS) portal that stands to be closed by the end of December if claimants do not attend to the errors on their applications.

A media statement issued by the Department of Employment and Labour on Wednesday states that simple errors in the applications are the main reason outstanding claims are yet to be finalised. The most common errors on the applications include incorrect banking details, incorrect income and invalid identity or passport numbers.

It’s Thursday morning at the Lurwayiso clinic and about 30 patients carrying their clinic cards are waiting outside. Some of the patients are inside the clinic already, also waiting. None of them will be seen by nurses today.

Fed-up with expensive trips to the clinic at Mpozolo 15km away, pensioners from Lurwayizo village in Willowvale in the Eastern Cape built their own clinic. But there are no nurses, because the provincial department of health has failed to send the nurses which the MEC promised.