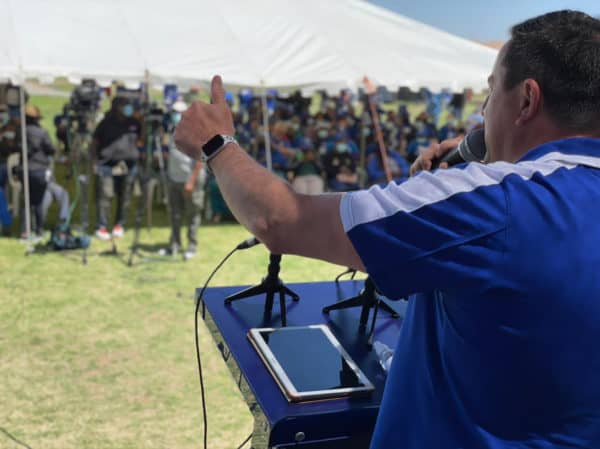 Tweeting on Sunday, DA leader John Steenhuisen felt the need to make it clear that under his leadership the DA would never enter into coalitions with the EFF in any municipality following local government elections this year.

He said it was a question that kept coming up and he needed to spell it out for voters ahead of the polls.

Steenhuisen implied that the EFF were corrupt and rent seekers and that their values were too far removed from the DA’s.

National police commissioner Khehla Sitole’s support of former president Jacob Zuma’s faction is one of the reasons he could lose his job.

Sithole was appointed police commission by Zuma in November 2017.

At the beginning of October the Presidency confirmed that Sitole is facing suspension and has been invited to make a case against his suspension to the president.

One of the taxi associations involved in the violence that led to four taxis being torched and six others damaged in the Johannesburg CBD on Saturday is blaming the government for the conflict.

The violence on Saturday was due to the rivalry between WATA and the Nancefield Dube West Association (Nanduwe).

No time to change price method, Eskom says in court bid against Nersa

Nersa’s rejection could leave the power utility with substantial costs to establish a new method within a limited timeframe.

Eskom has submitted an urgent high court review over Nersa’s decision to reject its fifth multi-year price determination (MYPD 5), with the regulator stating the power utility instead submitted the old method (MYPD 4) for the 2022/23, 2023/24 and 2024/25 financial years.

Eskom argued that Nersa should process its revenue application for at least one year, as required by law, as it had submitted its application on 2 June, despite the MYPD only being implemented from 1 April next year.

Avoiding jeers in township of his birth, Cyril cheered in Ace’s ‘stronghold’

The past few weeks have been a mixed bag for President Cyril Ramaphosa on the local government elections campaign trail after he decided to skip a return to Soweto this week due to concerns he would be met with another hostile welcome there.

In the Free State this weekend, however, he would have been relieved to be welcomed with cheers in Harrismith and Phuthaditjhaba – despite perceptions among some that the area has long been a “stronghold” for suspended secretary-general Ace Magashule.

Free State Premier Sisi Ntombela and Maluti-a-Phofung mayor Masechaba Lakaje were, however, booed by the crowd at the Makwane Sports Ground in Phuthaditjhaba.