Investigations are underway after eight people died in a taxi crash on Olifantsfontein Road in Centurion this morning. 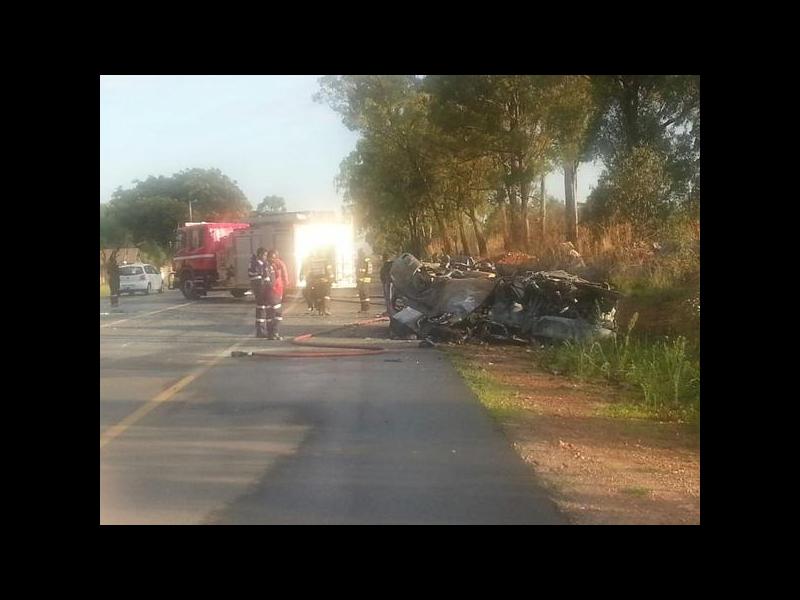 The scene after the taxi involved in the crash went up in flames, killing eight people. Pic: Netcare911.

Netcare 911 spokesperson Chris Botha said paramedics arrived on the scene to find the bodies of about eight people, one of which was a small child, still trapped in the burnt remains of the taxi, Rekord Centurion reported.

“It is suspected that eight people burnt to death in the wreckage. Exact details as to the cause of the accident are still unknown; however, the taxi overturned on impact and burst into flames,” said Botha.

He added that the Ford Ranger involved in the crash had veered off the roadway and slammed into a wall.

According to ER24, the accident happened before 5am.

Paramedics arrived to find the taxi on its roof, with several injured people a few metres from the wreckage.

“Paramedics found seven people with several injuries a few metres away from the taxi. One of them was in a serious condition. It is believed that they managed to escape the burning taxi through the broken windows,” said spokesperson Werner Vermaak.

A 35-year-old woman sustained severe burn wounds and possible fractures. She was airlifted to hospital.

Vermaak said the driver of the Ford Ranger sustained moderate injuries and was also transported to a local hospital.

Police are investigating the exact cause of the accident.