As South Africa on Wednesday marks a key date in the fight against apartheid, one of the last surviving leaders of that struggle says the nation's liberators have fallen out of touch with the people. 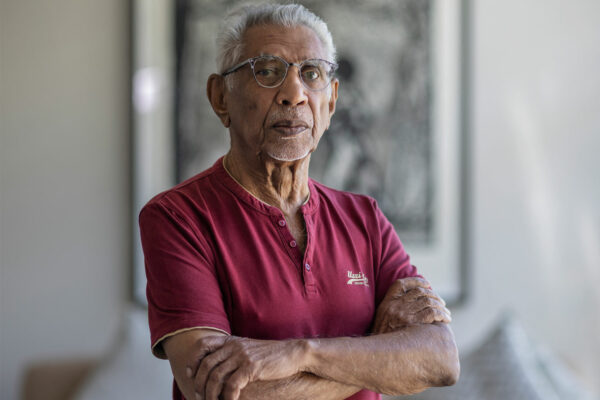 Anti-apartheid activist Mac Maharaj, 87, poses for a portrait in his house in Midrand, on March 31, 2022. Picture: Michele Spatari / AFP

In an interview with AFP, 87-year-old Mac Maharaj warned that corruption risked undermining the gains of the democracy that he fought and suffered for.

“Everything shows it has lost contact with the ground,” Maharaj said of the ruling African National Congress (ANC).

He was one of the party’s leading figures, spending more than a decade imprisoned alongside Nelson Mandela.

Maharaj famously smuggled Mandela’s autobiography Long Walk to Freedom out of prison and joined Mandela’s cabinet after he won the first free elections on April 27, 1994.

But a judicial inquiry this year laid out an extensive web of graft and cronyism under former president Jacob Zuma that left even basic government services gutted.

Maharaj also served as Zuma’s spokesman but retired in 2015, several years before his presidency was prematurely curtailed by mounting scandal.

“The country is facing a moment where there is a conjunction of different crises that are all feeding into one major crisis,” Maharaj said, citing graft, poverty and unemployment.

Maharaj believes that current President Cyril Ramaphosa is tackling corruption, albeit too slowly for some.

“There is real sense that under Cyril Ramaphosa, he is not doing enough, fast enough,” Maharaj said.

“But what I think Cyril had done right is that in the face of these challenges of weeding out corruption, he has never overstepped the boundaries of law,” he said. “That has slowed the process.”

“I hear people say they want a quicker prosecution, but we are dealing with corruption of an extremely complicated nature,” he said.

The judicial inquiry laid significant blame on the Gupta family from India, accused of widespread bribery, and on American consultancy Bain, which has been forced to recant some of its work and refund its fees.

The inquiry also singled out senior ANC members, which has only deepened in-fighting within a party that voters are increasingly disillusioned with.

ALSO READ: Freedom Day: Corruption one of the leading causes of not being truly free – IJR

“We have made many mistakes, and we have also moved the country forward in many respects,” he said, sitting opposite a bookshelf at an upmarket house he shares with his older sister and son, on the northern outskirts of Johannesburg.

“We have accumulated vast experience, but we are not drawing lessons from those mistakes,” said Maharaj.

During the struggle, Maharaj led the ANC’s underground operation. He was jailed for 12 years alongside Mandela at the notorious Robben Island prison.

After Mandela was elected president on April 27, 1994, Maharaj joined the cabinet as transport minister. A picture of the two men together hung next to a book shelf displaying some of the books he has penned or edited.

The ANC lately has preached self-cleansing and renewal, but according to Maharaj, it has “not yet fleshed out what renewal is.”

It needs “real revolution inside the party to bring about renewal”.

The book reveals intricate details about the jostling for position that unfolded before the start of formal talks that saw the country transition to democracy.

Maharaj played a key role in keeping those negotiations on track.

He joined the struggle as a student, was arrested in June 1964, charged with five others at the famous Rivonia Trial on 177 counts of sabotage. He smuggled Mandela’s memoir out of prison on his release in 1976.