All about Ankole cows – what is the big deal?

Due to the renewed interest in Ankole cows after the auction at Ramaphosa's farm, we take a look at the majestic creature. 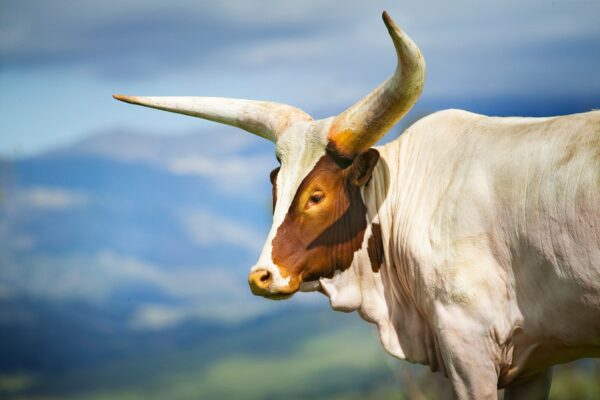 The strong pose with the distinctive horns of the Ankole Watusi Cattle, originally native to Africa. Picture: iStock

In the past 12 months, interest in Ankole cows on Google search has peaked twice. Once in early March 2022 and again this past weekend.

Related to the search term were searches for the types of breeds there are, how expensive they are, and South Africa’s president, Cyril Ramaphosa, who is a well-known game breeder.

Both times the term trended, Ramaphosa’s own livestock were set to appear in an auction.

The most recent game auction took place at Ramaphosa’s infamous Phala Phala farm, which has been making headlines as news of a concealed robbery at the farm emerged.

Seemingly unfazed by the optics of the details surrounding the Phala Phala farm robbery, the President went ahead with the scheduled game auction, which he is also said to have attended.

Ankole cows were among the most prized possessions up for auction on the day which is said to have generated north of R20 million in sales. But what is the big deal with this type of cattle?

What are Ankole cows/Ankole Cattle?

According to southafrica.co.za, Ankole cattle are part of the larger beef production industry of South Africa.

They are a breed of cattle that can be traced back to the hieroglyphs of the ancient Egyptians and the breed has formed part of the longhorn cattle tribes for more than 6,000 years.

“By migrating down the Nile River, the breed found their way to Uganda, known as the Pearl of Africa. The Banyankole people in Western Uganda, after whom the Ankole was named, believe the breed was created by God and brought to them by the founders of the Ankole Kingdom. To them, the Ankole are ‘the Cattle of Kings,’” reads an entry on the website.

The website also credits Ramaphosa with bringing the first Ankole genetics into South Africa in 2004.

“He is said to have gained interest in the cattle after a visit to Ugandan President, Yoweri Museveni, but was unable to bring live animals into South Africa because of inadequate disease control measures in Uganda.

“He then enlisted the help of Morné de la Rey, a vet and director of the embryo company, Embryo Plus. Ramaphosa then bought 43 cows, which were transferred from Uganda to an embryo station run by Embryo Plus in Kenya. Here the cows were artificially inseminated, and the embryos were flushed seven days later and sent to South Africa, where they were implanted into surrogate cows.”

Thereafter, the Ankole Cattle Breeders Society of South Africa was formally established in February 2018 and boasted almost a thousand registered cattle by the middle of 2019.

This society led this past weekend’s auction and hosted a gala dinner for its members at the farm on Friday evening.

Why are Ankole cattle so expensive?

One of the most basic concepts that informs the pricing of items is supply and demand. Despite the growth of the country’s Ankole cow population since first being introduced to South Africa, they still remain quite a rare breed in South Africa.

They also have quite the reputation as they are considered to be “majestic”, “regal” and “graceful” due to their appearance, namely their large horns.

Their blotchy coat, which comes in colour variants such as roan, strawberry, red and dark to light brown is also considered unique and beautiful.

What are Ankole cows used for?

In Uganda, the cows produce a lot of milk, which is sought after as it is said to be “tastier and healthier than milk from conventional dairy breeds”.

Though they were initially rarely used for meat, Ankole cow meat is said to lean, tasty, low in cholesterol and high in Omega 3 and 9.

These qualities are something that the Ankole Cattle Breeders Society of South Africa believes will draw the attention of health-conscious consumers and markets.

This breed is also able to adapt to harsh and extreme weather conditions, from cold and rainy weather to hot, dry desert climates which is why Ramaphosa was able to bring the breed to South Africa.

Breeders also consider them a good investment because they are able to thrive on low-quality forage and are highly disease and tick-resistant.