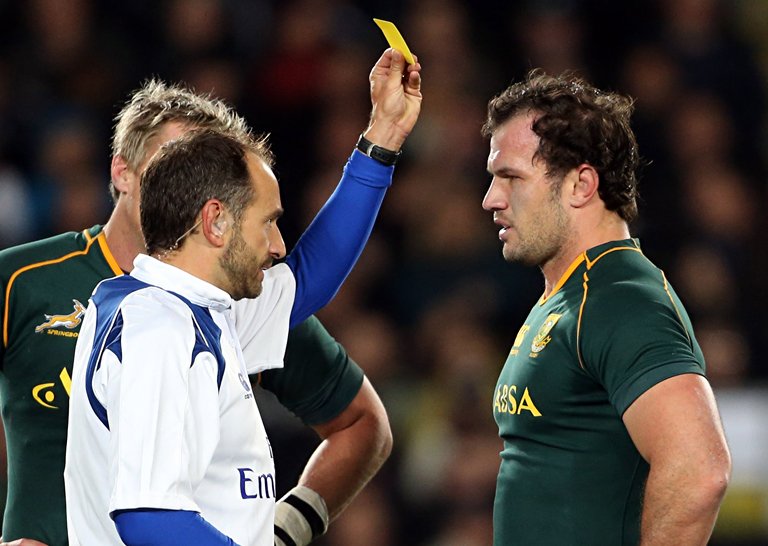 Bismarck du Plessis of South Africa (R) is yellow-carded by referee Romain Poite (L) during the Rugby Championship Test rugby union match between the New Zealand All Blacks and South Africa at Eden Park in Auckland on September 14, 2013.

This is despite the International Rugby Board (IRB) admitting that Du Plessis’ first yellow card was a mistake.

In a statement yesterday, the IRB confirmed that it was incorrect for referee Romain Poite to issue a yellow card to Du Plessis in the 17th minute of the Rugby Championship match between New Zealand and South Africa in Auckland on Saturday.

“Just as players and coaches make mistakes, the decision was an unfortunate case of human error by the match officials, who, having reviewed the match, fully recognise and accept they made a mistake in the application of law.

“All match official performan-ces are thoroughly reviewed and assessed by the IRB and are considered when appointments are made for future test matches,” it said in a statement yesterday.

Du Plessis’ red card following two yellows in the 29-15 Bok loss to the All Blacks at the weekend, should automatically lead to a disciplinary hearing, with a date still to be set.

“For a matter to be dispensed with at this hearing, the person appearing must plead guilty and accept the penalty offered by the duty judicial officer,” Sanzar said.

It is unclear how the IRB statement will affect Du Plessis’ disciplinary hearing.

Former Springbok coach Nick Mallett called the match an “absolute disgrace”. Speaking on SuperSport, he said a “match of this quality deserved to have 15 players on the field for the whole game”.

“That was a shocking decision,” a visibly irritated Mallett said, adding that referees have electronic equipment, as well as assistant referees, readily available to help with decision-making.

Mallett said Poite had “ruined” the game with a “ridiculous decision”.

Bok skipper Jean de Villiers didn’t want to be dragged in the red card furore following the match. “It is difficult enough to play the All Blacks with 15 players, so with just 14 it was very tough. But it is what it is,” he said.

The Boks returned from New Zealand yesterday and will have this week off before getting together on Sunday for their next Test in the Rugby Championship – against Australia at Newlands on September 28.

Despite having their nine-match unbeaten run broken, the Boks showed grit by not allowing the scoreboard to run away from them.