Magistrate Vincent Hlatshwayo says 'there is a strong probability that the applicant may have committed the offences alleged'. 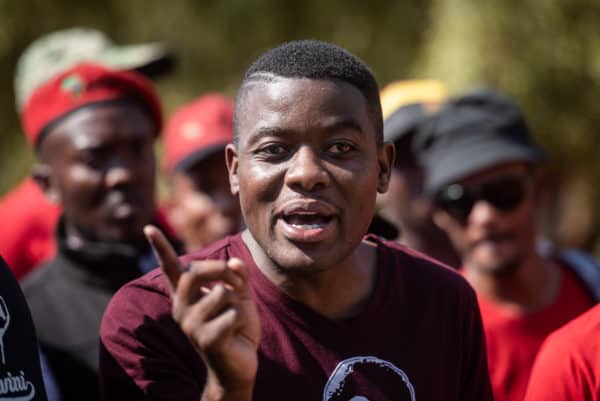 Picture File: Bonginkosi Khanyile is seen on the lawns of the Union Buildings, in the hopes of speaking to President Cyril Ramaphosa to ask for a presidential pardon in regards to the public violence charges against him. Picture: Jacques Nelles

Khanyile, a Fees Must Fall activist, was arrested last month by the Hawks in Johannesburg for allegedly instigating violence and looting that rocked parts of KwaZulu-Natal and Gauteng in July.

He faces charges of incitement to commit public violence and two counts of convening a gathering in contravention of the Disaster Management Act.

Magistrate Vincent Hlatshwayo on Tuesday said after having looked at the evidence presented in court, it was in the interest of justice for Khanyile to be granted bail.

“It is my considered view and opinion, for [sic] the little I’ve seen and heard, that there is a strong probability that the applicant may have committed the offences alleged, but that is not for this court to decide but the trial court. What is for this court is to decide is whether bail should be granted or not,” he said.

During his bail application last week, Khanyile’s lawyer Masibonge Mathomane asked the court to release his client on R500 bail, arguing that Khanyile had four children who depended on him for financial support.

State prosecutor Yuri Gangai disputed the defence’s arguments and painted a picture of Khanyile as a deadbeat father who splurged on himself while he paid R250 a month towards his children’s maintenance.

Khanyile, 31, is a staunch supporter of Jacob Zuma and had called for Zuma’s release after the former president was imprisoned for being in contempt of court.

He was accused of using social media and other platforms to instigate public violence.

As part of his bail conditions, Khanyile was ordered to suspend his social media accounts and not use them. He is also required to report to the Hillbrow Police Station twice a week, on Mondays and Fridays, between 6am and 6pm while he is at Wits University

If he is in Durban, Khanyile is required to report to the Durban Central Police station twice a week, also between the same hours

Hlatshwayo said: “The accused is warned that should he breach any of these bail conditions, the state has the right to bring in an application to have his bail cancelled and that he be kept in prison until the matter is finalised.”

The case was postponed to 23 September for transfer to a regional court.