A 'dodgy' intelligence report allegedly sparked the reshuffle in which Zuma demanded that Gordhan cut short his investor roadshow abroad. 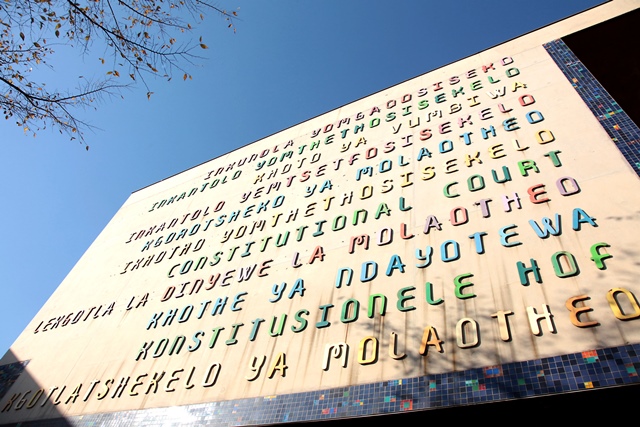 The writing on a wall of the Constitutional Court. Picture: Nhlanhla Phillips/African News Agency/ANA

Judgment has been reserved in an application that stems from former president Jacob Zuma’s infamous late-night Cabinet reshuffle, in which Pravin Gordhan was axed as finance minister along with his deputy, Mcebisi Jonas.

The application, lodged by the Presidency, was for leave to appeal the Supreme Court of Appeal’s (SCA) dismissal of the Presidency’s bid to overturn a ruling relating to the release of records that explains the controversial reshuffle.

The DA lodged a review application, in terms of Rule 53 of the Uniform Rules of Court, challenging the constitutional validity of Zuma’s reshuffle on April 4, 2017.

It argued at the time that, through Rule 53, it sought, among other relief, disclosure of the record of Zuma’s decision.

Zuma previously described this as an abuse of court processes and argued that he exercised his powers in terms of section 91 (2) of the Constitution – which gave him the prerogative to choose his executive. He said that changing his Cabinet was an executive decision that deserved protection from disclosure.

The DA succeeded in the Gauteng High Court in Pretoria.

Zuma previously approached the SCA but, when he stepped down from his position on February 14, 2018, President Cyril Ramaphosa continued to pursue the matter so that the High Court ruling did not set a precedent for future Cabinet reshuffles made by a sitting president.

Last year, the SCA said the relief sought by the Presidency would not have any practical effect or result.

“The appeal must, therefore, be dismissed,” the SCA ruled at the time, saying that circumstances had changed.

The Presidency has now taken the matter to the Constitutional Court, arguing that the matter is not moot.

Addressing the apex court on behalf of the Presidency, advocate Ishmael Semenya, SC, said: “We hear somewhere out there that there is an intelligence report in which the president had derived upon [when he reshuffled his Cabinet]. Well, if there is such a document, produce it yourself. You don’t need a Rule 53,” he said.

He said even in the public domain, there were suggestions that there was an intelligence report.

“But where we commence our submissions – was to point out that in the announcements itself, no reference whatsoever is made in relation to an intelligence report or whether that decision was informed by [an] intelligence report.”

Arguing on behalf of the Democratic Alliance, Steven Budlender told the court that it was easy to forget where the country was two years ago following the infamous Cabinet reshuffle.

Budlender added that the DA was trying to set aside Zuma’s decision. However, the only reason the review was abandoned was because the Cabinet ministers changed yet again.

Budlender also told the justices that a decision-maker should provide records and reasons.

“He can’t say: ‘I am not telling you what my record of my reasons are’ and that is why, with respect… it is quite right to direct that he produces records for his reasons.

“We would ask that the appeal is dismissed either, because it is moot [and] because, in light of what has transpired, it is clear that many of the difficult issues are not issues in this case but issues in some future case.”

“We know that the decision to dismiss a Cabinet member can be reviewed for rationality and legality,” he said.

However, Semenya said: “If we go to the merits and we look at the judgment of the [High Court], we are able to show why it is wrong.”

High Court Judge Bashier Vally explained at the time that most of the cases where Rule 53 was applied involved a decision or proceedings of an inferior court, a tribunal, a board, or an officer performing judicial, quasi-judicial or administrative functions – not an executive decision.

Zuma relied on this to contend that the provisions of Rule 53 did not apply to an application to review his executive decision to reshuffle his Cabinet. The weakness in Zuma’s case was that he had relied on the literal interpretation of the rule, Vally said.

Medical-record leak not an 'actionable violation' of Zuma's rights, says court
11 hours ago
11 hours ago

Medical-record leak not an 'actionable violation' of Zuma's rights, says court
11 hours ago
11 hours ago