There’s nothing wrong, immoral or improper with merely saying someone has been fired, argues DA’s senior counsel Ismail Jamie. 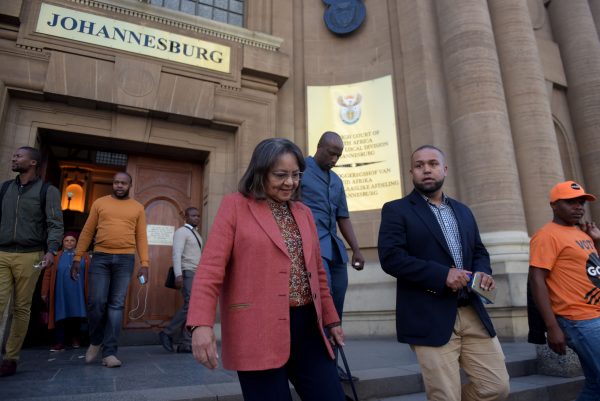 Was it defamatory to say a person was “fired”, whether true or not? That seemed to be at the centre of the Democratic Alliance’s (DA) argument against being forced to apologise to former DA member Patricia de Lille by the Electoral Commission for saying she was fired from the party.

The matter was heard at the High Court in Johannesburg during the DA’s challenge of the commission ordering that the party apologise for stating during election campaign phone calls that it fired De Lille for being involved in wrongdoing in the City of Cape Town.

These statements formed part of a script read out in automated phone calls directed at potential voters in the run-up to the May 8 elections. The DA felt it did not have to apologise for that because they were protected by the freedom of speech clause in the constitution and that the message constituted fair comment.

“There’s nothing wrong, immoral or improper with saying someone has been fired,” argued the DA’s senior counsel Ismail Jamie.

While the three presiding officers grilled Jamie for explanations on how the words “we fired [De Lille]” could be interpreted as fair comment, he argued the stipulations in the Electoral Act on what parties could say during an election were “draconian” and lamented that such an “innocuous” word as “fired” could render one liable for civil or criminal liability.

Jamie went on to compare the utterance to a similar campaign message stating that former president Jacob Zuma had stolen government funds to build his Nkandla home. That, he argued was a far worse scenario for which the same commission found no wrongdoing.

Speaking during recess, De Lille said it was still early days to make an assessment of the strength of the DA’s argument, but pointed out that the party would have a difficult time arguing that fair comment need not be factual.

“I think the court also made a point between fact and comment – if it is a fact, can they produce the evidence whether they, in fact, fired me?

“And that is where they are lying – they say no, it was comment, and the court is asking ‘But is it a fact?’”

The Electoral Commission of SA – the first respondent – was opposing the DA along with the Good party and the ANC, the second and third respondents. Also in dispute during proceedings was whether the commission had acted within its powers when it ordered the DA to apologise to De Lille.

In the DA’s heads of argument, the party contends that state functionaries, no matter how well-intentioned, may only do what the law empowers them to do.

“On April 15, 2019, the first respondent [‘the commission’], claimed for itself the power to decide whether political speech is true or not,” was how the party phrased it, “and to enforce its decision on pain of up to a decade’s imprisonment – all without recourse to a court and with very little due process.

“The commission has never, to the applicant’s knowledge, claimed such a power before.”