Zuma tried every trick in the book to avoid charges, say judges

The NPA also says that extraneous litigation surrounding the case was the reason for years of the delay. 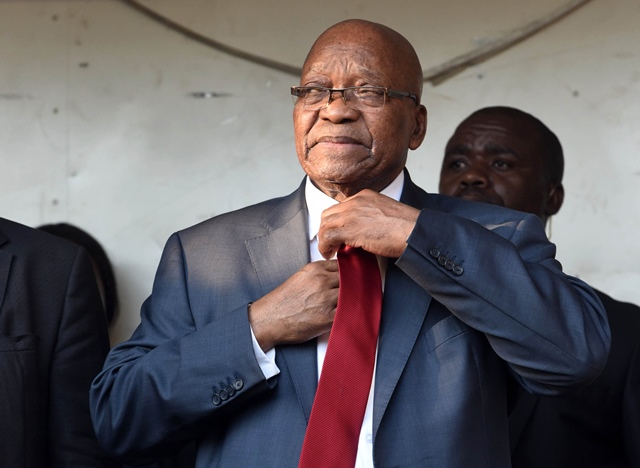 Former president Jacob Zuma after appearing at the Pietermaritzburg High Court on corruption charges, 20 May 2019, after his battle for the court to grant him permanent stay of prosecution on the charges related to the multibillion-rand arms deal. Picture: Nigel Sibanda

Former president Jacob Zuma is expected to be tried on 18 charges of fraud, corruption, money laundering and racketeering next week.

This is after the KwaZulu-Natal High Court in Pietermaritzburg handed down judgment on Friday, in the stay of prosecution application which Zuma and his co-accused, French arms dealer Thales, lodged.

A full bench, comprising judges Thoba Poyo-Dlwati, Bhekisisa Mnguni, and Esther Steyn, heard arguments in the matter in May this year.

A barely audible Mnguni read out the orders. The full judgment will be made available shortly.

The matter is set down for trial from October 15.

The National Prosecuting Authority (NPA) argued that Zuma’s legal teams had employed every conceivable trick in the book to delay the matter, the so-called “Stalingrad” defence.

The NPA also submitted that extraneous litigation surrounding the case – including a successful Democratic Alliance (DA) court bid which secured the release of the so-called spy tapes – was the reason for years of the delay.

Zuma’s legal team submitted strong arguments that the case against him was politically motivated and the delays were caused by the NPA’s decision – twice – to drop the charges. The charges were reinstated by a High Court order last year.

Thales, which was awarded significant portions of the controversial multibillion-rand arms deal, also sought similar relief from the court in May.

The 18 charges against Zuma date back to 2005 and relate to 783 payments, totalling just over R4 million, which Zuma received from his then-financial adviser Schabir Shaik and his Nkobi group of companies between 1996 and 2005.

In 2005, Shaik was found guilty of fraud and corruption for the same payments, which led many to believe Zuma, then the deputy president, would walk the same path.

Indeed, he was fired by then-president Thabo Mbeki, but led a resurgent comeback to secure the ANC presidency at the party’s Polokwane conference in 2007.

The spy tapes are secretly recorded conversations of former NPA boss Bulelani Ngcuka and then-Scorpions boss Leonard McCarthy discussing when Zuma should be charged in the run-up to Polokwane.

Zuma attempted to use the spy tapes to argue that his prosecution was politically motivated and that he was a victim of a grand conspiracy.

Medical-record leak not an 'actionable violation' of Zuma's rights, says court
19 hours ago
19 hours ago

Medical-record leak not an 'actionable violation' of Zuma's rights, says court
19 hours ago
19 hours ago