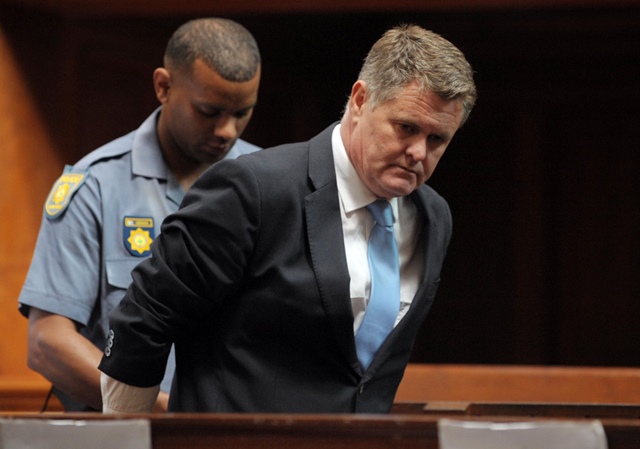 Jason Rohde, the businessman convicted of murdering his wife, arrived at the high court in Cape Town on 5 December 2018 to listen to evidence in his sentencing proceedings. Picture: Armand Hough / African News Agency (ANA)

Convicted wife killer Jason Rohde’s former girlfriend Jolene Alterskye’s comments about the judge who sentenced him to an effective 20 years behind bars as well as the detectives whose investigation sealed his fate has landed her in the dock.

On Monday, Alterskye appeared in the Cape Town Magistrate’s Court on charges of crimen injuria for comments she made on social media and in a text message after Rohde’s conviction and sentencing in February.

Western Cape High Court Judge Gayaat Salie-Hlophe had handed him 18 years for the murder of his wife, Susan, and five for defeating the ends of justice by staging her suicide, three of which would run concurrently. He is appealing the sentence.

Alterskye had earlier this year issued an apology to Judge Salie-Hlophe and prosecutor Louis van Niekerk after a text message she had sent was widely distributed.

The Weekend Argus reported at the time that the message read: “I am [appalled at] this so-called justice system, the whole case was an attempt by the State to create a crime which never happened so they can lock up a ‘high-profile white man’ to try [to] show the country that they doing their job. As far as I am concerned, the State and the judge are the same team and if the State acted unlawfully in illegally searching properties and bribing State witnesses, what else did they fabricate in order to get their Xmas bonus? A corrupt country starts with corrupt police, and I do hope the truth [will] be revealed and actual justice served.”

She later retracted her comments in a letter delivered to the judge and prosecutor.

In it, she said she was under “intense media and public scrutiny”, labelling her behavior as “unacceptable”.

Prior to this, Alterskye had commented on a Facebook post by the SA Police Service in which it hailed the work of detective sergeants Marlon Appollis and Stephen Adams following Rohde’s sentencing.

She had commented: “These two ‘officers’ did nothing but lie, and acted unlawfully, raiding my home and intimidating my child without a legal search warrant. After months of broken promises I received my ‘illegally’ confiscated goods through whiskey pay-offs, as that is the only language they understand. These are not people we should respect nor promote so hopefully they do not get a higher rank. I do hope these detectives are not the norm and that there are good cops out there,” the estate agent posted.

Rohde’s former colleague, Brendan Miller, testified during his trial that Appollis had asked for a drink after arriving at his home to take a statement one morning.

Van Niekerk had spoken to him who said he had seen the whisky and asked if he could have a sip, News24 previously reported.

He said Appollis recalled that he had the whisky after taking the statement when they were standing and smoking on Miller’s balcony around midday.

On Tuesday, William Booth, Alterskye’s attorney, confirmed to News24 that Judge Salie-Hlophe, Adams and Appollis were the complainants in the case against his client.

Booth said the director of public prosecutions wanted the case to be sent to the High Court, to which he had objected, arguing that never in his career had he heard of a crimen injuria case being dealt with there.