The result was that Willem Oosthuizen and Theo Jackson was sentenced to an effective five years' imprisonment. 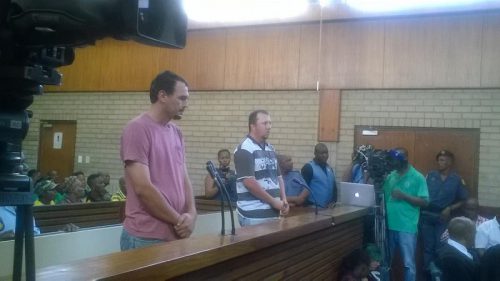 The Supreme Court of Appeal (SCA) has amended the conviction and sentence of Willem Oosthuizen and Theo Jackson – the pair involved in the so-called “coffin assault” case in 2016 – setting aside their attempted murder and intimidation convictions.

The pair were found guilty of assault with intent to do grievous bodily harm, kidnapping, attempted murder, intimidation and defeating the ends of justice in 2016 when a video surfaced of them forcing Victor Mlotshwa into a coffin after accusing him of trespassing and theft.

They threatened to burn Mlotshwa, who denied stealing anything, alive.

Mlotshwa said he was attacked by the two while hitch-hiking.

While both denied the charges at the time, Oosthuizen was sentenced to 11 years’ imprisonment, and Jackson to 14 years.

According to court papers dated December 2, the SCA adjusted their sentences and conviction, finding the pair guilty of assault with intent to do grievous bodily harm and kidnapping, while Jackson maintains his convictions of defeating the ends of justice.

Both have subsequently been sentenced to five years’ imprisonment on the assault charges and one year for kidnapping, while Jackson received one year for defeating the ends of justice for burning the coffin which was to be used as evidence.

In the ruling, Judge Yvonne Thokozile Mbata said: “I would order the short sentences to run concurrently with the five-year sentence. The result is that both appellants will be sentenced to an effective five years’ imprisonment.”