Pule's family were informed by the senior prosecutor that, while the case was set down for 9 July, the magistrate had instead written it down for the 23rd. 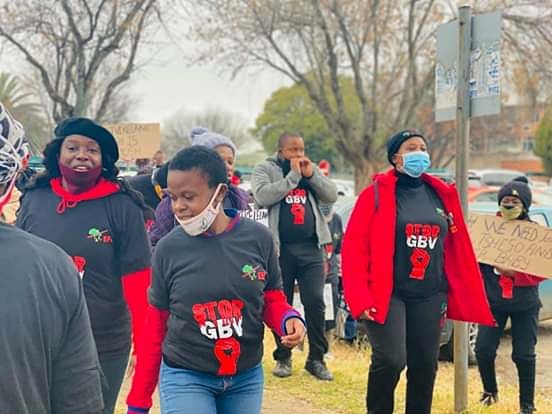 EFF members demonstrate against GBV at the Roodepoort Magistrate's Court, 9 July 2020, where the alleged killer of Tshegofatso Pule was supposed to appear. Picture: Twitter / @Tyrone_Mkansi

The family of slain 28-year-old Tshegofatso Pule returned home disappointed and frustrated from the Roodepoort Magistrate’s Court on Thursday after learning the case against her alleged killer would not be heard.

Murder accused Mzikayise Malephane was expected to appear in court on Thursday.

After going back and forth trying to find out which courtroom the case would be heard in, Pule’s relatives were informed the matter would not be heard as they had thought.

National Prosecuting Authority spokesperson Phindi Mjonodwane informed media that the case had been postponed in “absentia” to 23 July, adding they, too, were only informed about the development in the morning.

A group of EFF members and supporters of the family braved the cold in Gauteng and gathered outside the court with placards.

Among those attending to support the Pule family was EFF deputy secretary Poppy Mailola.

Speaking to the media outside the court, after being briefed by Pule’s uncle, Tumisang Katake, Mailola said the family had tried to find out what was happening upon arriving in court.

But they were informed by the senior prosecutor that, while the case was set down for 9 July, the magistrate had instead written it down for the 23rd on the charge sheet.

Malephane, 31, is facing a charge of premeditated murder for allegedly killing Pule who was eight months pregnant at the time.

Her body was found hanging from a tree near Roodepoort on 5 June. She had been stabbed in the chest.

Pule was last seen by her relatives on 4 June, leaving her Soweto home to visit the father of her baby, Ntuthuko Shoba, in Florida.

Mailola said the lack of communication to the family was disappointing, and that it was also an inconvenience because some had had to take the day off from work to attend the matter.

“We are here today as the EFF, together with the community, to support the Pule family during this difficult time. As we come out of court today, we are very, very disappointed and frustrated because what happened inside there is not okay.

“Actually what happened is that the magistrate is on leave and he has written the wrong date on the charge sheet. The family was told to come on the 9th but [on] the charge [sheet] is written the 23rd,” said Mailola

“We really have to look into the justice system in South Africa because there are very serious cases like these that are happening in our communities but they are not taken serious.

“Just a concept of just communicating to the family. No one [told] the family, they heard when they got inside. Even the senior prosecutor was puzzled the magistrate had written the 23rd on the charge sheet and not the 9th,” she said.

It was previously reported that Malephane had informed the court that he was abandoning the services of a Legal Aid lawyer in favour of a private attorney.