The women, who are sex workers, are alleged to be part of a syndicate that drugs and robs people. 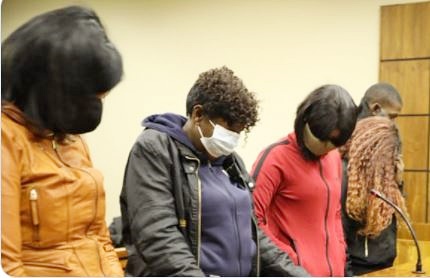 The four women accused of murdering Zulu Prince Lethukuthula Zulu will spend Christmas behind bars after they were denied bail by the Randburg Magistrate’s Court on Monday.

In her judgment, Mkhasibe said she did not doubt that the women would attend court if they were granted bail because they had done so in their other pending matters. However, she agreed with the State that the women might be a danger to society.

“There is a likelihood they might undermine the criminal justice system as they are alleged to have committed the crime while out on bail and this is based on their past conduct. There is a likelihood that the accused may endanger the safety and well-being of male persons whose extensions are to have a great time at entertainment establishments,” she said.

A night of sex and drugs

The women are accused of Zulu’s murder after they had drugged the prince and a friend. They then sold their belongings.

Zulu’s body was discovered by security guards at his Johannesburg home at Graceland residential complex on 6 November.

It is not in dispute that the women met the prince and his friend at a News Cafe in Randburg, where they bought the women drinks and later moved to the men’s home and continued drinking.

Some of the women claim that Zulu and his friend had allegedly taken cocaine during the course of the night, but prosecutor Yusuf Baba said police found no drugs at the scene. The only thing found was insulin needles, which Zulu used because he was a diabetic.

In her statement, Moremane alleged that she had sex with Zulu and admitted to taking a microwave and R750 from the home. She said she noticed that the prince was getting weak and was snoring with his eyes open.

The women, who are sex workers, are alleged to be part of a syndicate that drugs and robs people.

In their holding statements, following their arrests, some confessed to having drugged the prince and his friend.

“I am apprehensive of the applicant’s holding statement that she saw the deceased snoring with his eyes open and yet she did not see the need to call an ambulance for medical intervention.

“Furthermore, in her bail affidavit, she said that she noticed the deceased was asthmatic because of the asthma pumps on his bedside. To my mind, this should have alerted the applicant not to administer five sleeping tablets, understanding the deceased’s condition and the possibility of an overdose of any kind,” said Mkhasibe.

Mkhasibe also questioned whether Mbedzi, who is an e-hailing driver who regularly picked up the women, could have saved the prince’s life had he questioned why the women were leaving the house with appliances and crockery.

The matter will be back in court on 15 February next year.