The president's attorneys have also accused Mkhwebane of committing perjury. 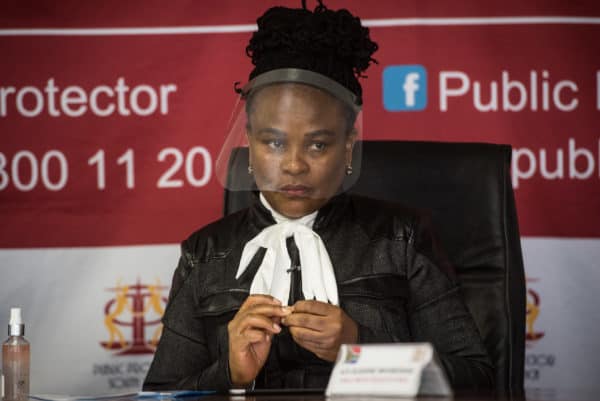 According to TimesLive, Ramaphosa wants the ConCourt dismiss Mkwebane’s application with personal costs.

Last month, Mkhwebane applied to the ConCourt for the “rescission, varying and/or reconsideration” of the harsh court loss she suffered when her appeal in the case for the disclosure of CR17 campaign funding for Ramaphosa’s ANC presidential campaign of 2017 was dismissed.

The ConCourt majority judgment held that Ramaphosa did not deliberately mislead Parliament about the donations, in contrast to what Mkhwebane found in her report.

The apex court ruled the public protector changed the Executive Ethics Code to align with her findings.

Ramaphosa’s legal team, in an affidavit, has since refuted Mkhwebane’s statements, describing her allegation as “manifestly false”.

The president’s attorneys have also accused Mkhwebane of committing perjury, further asking the ConCourt that the she be referred to the National Prosecuting Authority (NPA) in an effort to have her conduct when compiling the CR17 campaign report investigated, Business Day reported.

Mkhwebane approached the ConCourt after her report into the CR17 campaign was set aside in March last year by the Pretoria High Court.

The public protector released the report on the CR17 campaign in July 2019.

In the report, she found Ramaphosa had deliberately misled Parliament and recommended an investigation by the police into possible money laundering.

Speaking to The Citizen earlier in July, legal expert Ulrich Roux said the chance of Mkhwebane’s application being successful was low.

“As I see it, the public protector’s application will be dismissed if she does indeed file it. The Constitutional Court found many things regarding her report in general, not just the fact that she violated the Executive Ethics Code. The court did rule she had no power to investigate private affairs.

“On her argument that she relied on a different code is a point she will obviously latch to. That is going to be her biggest case to have the ruling rescinded. I don’t believe these grounds are enough for the Constitutional Court to rescind its own judgment,” Roux said.

With her term in office set to end in 2023, Roux further said the Mkhwebane’s reputation had already been tarnished, saying the CR17 campaign judgment was “another in nail the coffin”.

“Her track record since she came into office has been dismal and this latest court defeat isn’t helping her career either. She is already being investigated for her competency in office by parliament. Her reputation has already been tarnished. She seems to be undoing all the work her predecessor, Thuli Madonsela, has done in a short space of time.”