The suspects were arrested on Tuesday morning and are facing a numbers of charges, including murder. 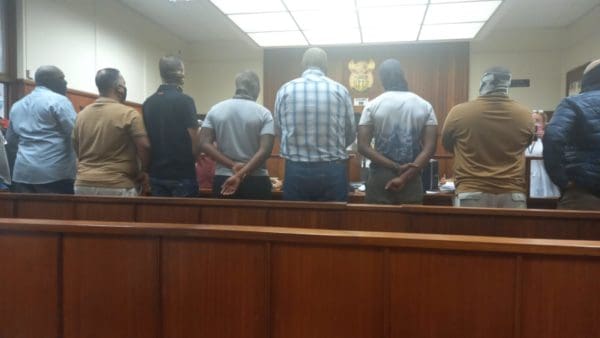 The officers – aged between 39 and 52 – were arrested by the Independent Police Investigative Directorate (Ipid) on Tuesday morning and appeared in the court the same day.

They are due back in court on 29 October.

They are facing a number of charges including torture, attempted murder, murder, kidnapping and defeating the ends of justice.

According to Ipid, a 10th officer is also expected to be arrested later on Tuesday.

A senior official, who is a station commander, and another officer are also due to be arrested this week, on Wednesday and Thursday, respectively.

Last Thursday, nine officers were arrested and appeared in the Durban Magistrates Court for a bail application in connection to the death of Regan Naidoo, according to GroundUp.

In 2018, Naidoo died after he was allegedly assaulted by police officers at the Chatsworth police station in Durban.

He was being held for questioning on suspicion of buying a firearm used in a local murder.

They were granted bail of R3,000 each and are due back in court next month.

An analysis of Ipid case data by investigative journalism unit Viewfinder, which is a partner to the GroundUp newsroom, revealed that police in Chatsworth had been implicated in at least 14 killings, 46 assaults, six rapes and five torture cases between April 2012 and March 2020.

During that period, according to this database, no police officers were disciplined or criminally convicted for such crimes.

A further 12 people were also reported to have died in police custody at Chatsworth during the period under review.

Viewfinder’s investigation has uncovered some reasons behind police officers often escaping accountability when implicated in violent crimes in South Africa.