A man has been arrested in Klawer after he was found in possession of drugs with an estimated street value of R5.5 million on Friday, Western Cape police said. 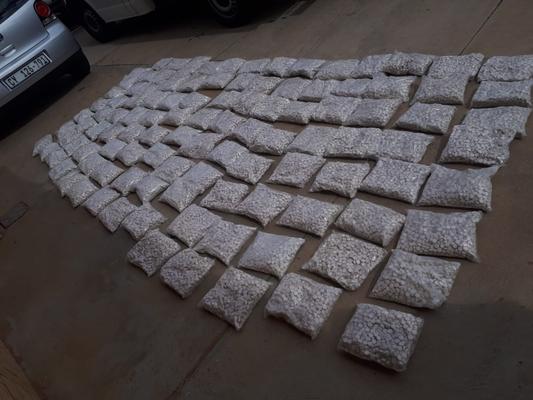 A man has been arrested in Klawer in the Western Cape after he was found in possession of drugs with an estimated street value of R5.5 million on Friday. Photo: SAPS

“Partnership policing stopped a man in his tracks and dealt a massive blow to the drug trade in the Western Cape,” Sergeant Noloyiso Rwexana said.

On Thursday, provincial traffic officers stopped a vehicle during a routine stop-and-search operation and took it to Klawer police station when they discovered there was a problem with the vehicle’s documentation. A case of fraud was opened and a suspect was arrested.

On Friday, police in from Klawer checked the details of the suspect and “saw that he was an active criminal in several serious offences”, Rwexana said.

“They decided to conduct a search on the vehicle, a VW delivery vehicle. Members from the K9 unit assisted in the search and a total of 111,000 Mandrax tablets were found hidden underneath the vehicle. The estimated street value of the drugs is R5.5 million.”

A 33-year-old man will appear in court on Monday on charges of fraud and dealing in drugs, Rwexana said.