The alleged criminal was taken out when the suspects tried to hijack a white VW Golf 6.

One of three suspects was shot and killed in a failed hijacking on Gloucester Road in Kensington on August 26, reports the Joburg East Express.

“The would-be hijacker was shot and killed when the suspects tried to hijack a white VW Golf 6 belonging to a security company. At the time, officers from the security company were standing and talking outside their vehicle,” said Cleveland SAPS spokesperson Capt Johan Jordaan.

“A white VW Golf 4 approached and three armed men jumped out and pointed their firearms at them.” One suspect was shot dead and the accomplices fled the scene.

“Several shots were fired at the getaway vehicle,” said Jordaan. “A firearm was recovered along with several spent cartridges.

Police have opened an inquest docket and attempted murder case, which will be investigated by the Cleveland SAPS.

Anyone with more information can contact the Cleveland SAPS on 011 677 5745,” said Jordaan. 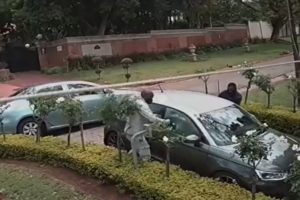 WATCH: Audi smashes into getaway car during attempted hijacking in Tshwane
2 weeks ago
2 weeks ago

WATCH: Audi smashes into getaway car during attempted hijacking in Tshwane
2 weeks ago
2 weeks ago