Lamola has committed to lead more raids at correctional facilities across the country. 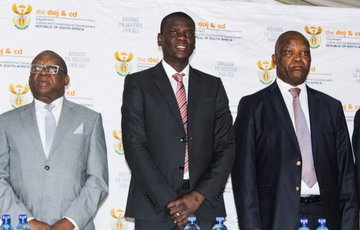 A raid at the Durban Westville Prison on Friday, attended by Minister of Justice and Correctional Services Ronald Lamola resulted in the confiscation of several cell phones and dagga slopes.

Lamola said the raid on the prison in KwaZulu-Natal was part of an ongoing effort to curb the smuggling of contrabands by offenders and errant officials.

Lamola has committed to lead more raids at correctional facilities across the country to implement the department’s zero-tolerance policy towards the smuggling of contrabands at all its centres, a statement read.

“We want to create an environment that is conducive towards the rehabilitation of offenders at all our centres and the smuggling of contrabands is one of the disturbances that we want to uproot and we will continuously look at ways that we can address this,” Lamola said.

He also promised harsh action on officials who are involved in enabling the smuggling of contraband, adding that the department will not show any element of mercy towards guilty officials.

“Offenders who are caught with the contrabands will be dealt harshly and we will regularly do patrols and searches so that we can control what offenders’ access in our facilities.”

Lamola told media on Friday evening that similar raids were conducted during the week.

“Offenders are becoming aware that there is procedure and stabilisation. The officials of this place are now restoring authority in this area, they are now also taking control. So far, I am happy with the progress that is made,” Lamola concluded.