A vehicle tracking company picked up a jamming signal and immediately activated a response team, but four suspects are still at large. Six suspects were arrested near Carnival City on Wednesday after a truck was hijacked at a Pomona warehouse earlier that day, reports Kempton Express.

The truck, carrying clothing and electronic devices with an estimated value of R4 million, left the warehouse between 11am and 11.30am.

At around midday, a vehicle-tracking company picked up a jamming signal and immediately activated a response team. They teamed up with private security, and, with the assistance of the police, located the truck at a petrol station near Carnival City Casino, said Peters. 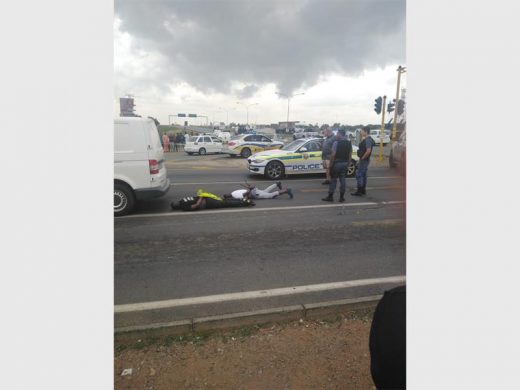 Six suspects were arrested near Carnival City after a truck hijacking in Kempton Park on Wednesday.

A white Nissan Almera and a red/maroon Hyundai i10 were allegedly escorting the truck. On noticing the approaching police vehicle, the two suspicious vehicles sped off and there was an exchange of gunfire. One suspect was wounded during the shoot-out and was rushed to hospital, where he was recovering under police guard.

Peters said the police cornered the Nissan Almera just over a kilometre away from the petrol station on the Springs road. The four occupants were arrested and police recovered two firearms.

Reports further suggest that the red/maroon vehicle sped off in the direction of Wattville. Police are searching for about four suspects who were in the Hyundai i10.

The six suspects, aged from 28 to 65, will face charges of attempted murder, possession of unlicensed firearms and ammunition, possession of stolen property, possession of a suspected hijacked truck, and contravention of the Electronic Communications and Transactions Act.