1st for Women joined forces with the United Nations Women and the department of women, youth and disabilities to launch the campaign. 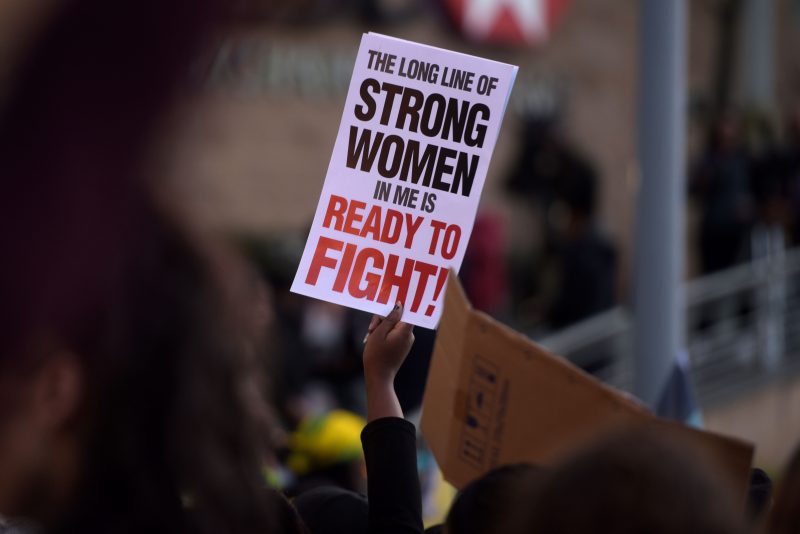 Women protest outside the JSE in an attempt to have #sandtonshutdown, as part of country-wide protest lead by women against gender-based violence, 13 September 2019. Picture: Tracy Lee Stark

A pilot programme aimed at fighting the scourge of gender-based violence and femicide (GBVF) will launch in Diepsloot – a suburb which has had one of the highest rates of violence against women in South Africa.

Robyn Farrell, the CEO of 1st for Women insurance, said: “A prevention and response approach to addressing women abuse in South Africa is critical. With this in mind, we will be launching a school-based learning programme at 20 registered early childhood development (ECD) centres and five primary and high schools in the Diepsloot community for children, aged three to 18. The programme also includes a comprehensive community-based support programme for survivors of abuse – from trauma to prosecution.”

1st for Women joined forces with the United Nations (UN) Women and the department of women, youth and disabilities to launch the campaign.

Farrell was speaking at the official launch of 365 Days of Activism at the Radisson Blu Gautrain Hotel in Johannesburg on Tuesday.

Phumzile Mlambo-Ngcuka originally launched the 16 Days of Activism on Violence Against Women and Children campaign in 2007. Mlambo-Ngcuka is now the executive director of UN Women.

“Today, we are here to mark Human Rights’ Day because women’s rights are human rights. Today, as we end 16 days of activism, I concur that we are not stopping the work for 365 days. We will work every day because every day a woman dies. So who are we to rest?” the former deputy president said.

The insurance company, which has contributed more than R70 million to organisations that focus on fighting women abuse and has assisted more than 90,000 victims and survivors since 2005, says despite these efforts, violence against women and children continues.

“It’s relentless, it’s gruesome and it’s a shame on the fabric of our society.

“I hang my head in shame every time there’s another murder, another rape – especially this year. It’s been a tsunami of shame and enough is enough,” Farrell added.

The incidents of GBVF in 2019 alone prompted the insurance company to re-evaluate the foundation’s approach to fighting women abuse.

As a result, Diepsloot was highlighted as a hotspot where the programmes designed to address the scourge could be piloted.

“The programme includes self-esteem, physical alertness and body-consciousness training for girls and a programme for boys that is focused on training and equipping them with the necessary social courage to challenge cultural norms that condone violence against women and girls, and to intervene when girls and women are being abused,” Farrell said.

A national rollout will be considered following the implementation of the pilot in Diepsloot. This year’s 16 days of activism was marred by several gruesome murders of women and children, including the killing of 21-year-old Precious Ramabulana.

Ramabulana was stabbed more than 50 times in her room in Limpopo. President Cyril Ramaphosa previously revealed that Ramabulana’s alleged killer had a pending case for “a rape type of charge”.

Farrell called the horrific events a tipping point for the country and a sign that it was time to take action.