Maile said they will not be threatened or intimidated when dealing decisively with people who are illegally occupying houses and land. 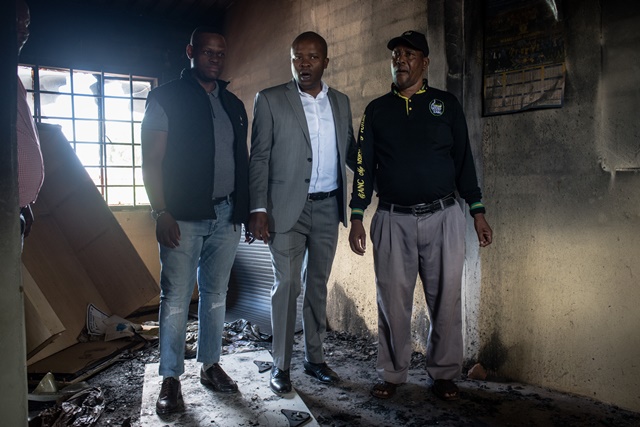 The ANC councillor’s office in Ward 15, Mamelodi, Tshwane, that was torched over the weekend, has been the target of destruction before, Gauteng Human Settlements, Urban Planning and Cogta MEC Lebogang Maile confirmed on Monday.

News24 previously reported that the councillor’s home was also the subject of an attempted arson attack which was linked to community backlash over the illegal occupation of a block of flats in Mamelodi.

According to a statement by the ANC in Tshwane, the attack is linked to a court battle between the City of Tshwane’s department of human settlements and people who illegally occupied a recently completed 250-unit block of flats constructed by the department, in Ward 15.

Visiting the burnt offices on Monday morning, Maile condemned the arson attack, calling it an act of criminality by faceless cowards.

“We believe the police must work with the community to try and apprehend these criminals who have committed these acts. There is no excuse. It doesn’t matter what reasons they have, this is unacceptable,” Maile said.

“We are very much concerned and would like to work with the municipality and authorities to make sure that councillors and other public representatives are protected and safe in the communities.

“It can’t be right that the people who have been elected by communities to represent them don’t feel safe where they live and are not protected.”

“We want to urge members of the communities to work with the councillors and to also bring whatever information they have at their disposal to the law enforcement agencies.”

Commenting on the possible motive for the attack, Maile said they will not be threatened or intimidated when dealing decisively with people who are illegally occupying houses and land.

He added that there can be no justification for attacking councillors and their offices, no matter what the reasons are.

Gauteng police spokesperson Brigadier Mathapelo Peters confirmed to News24 that police in Mamelodi are investigating a case of malicious damage to property following an attack in the early hours of Friday morning. It was reported the house of a local councillor was attacked and both the house and the councillor’s vehicle were damaged by unknown persons.

She said no suspects have been arrested at this stage.