'...we are taking to the streets, to give drug dealers a 48-hour notice to vacate our area,' said Dereleen James from the Yellow Ribbon Foundation. 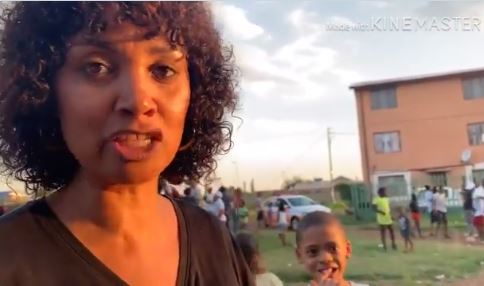 Dereleen James from the Yellow Ribbon Foundation explains why and how they are going to chase drug dealers from Eldorado Park. Picture: Twitter video screengrab

Residents from Eldorado Park, south of Johannesburg have had enough of drug dealers because they have put the community under siege by selling drugs to the youths who, they say, have been tormenting their families for money.

Community leader and anti-drug activist Dereleen James from the Yellow Ribbon Foundation said the community has embarked on daily raids to chase out all drug dealers because law enforcement had failed to do so.

“Since 2013 we have had all spheres of government coming here but we find that their interventions are short-lived and they have no impact so that is why we are taking to the streets, to give drug dealers a 48-hour notice to vacate our area,” said James.

A group of mothers and community activists in #EldoradoPark went door to door to hand over a letter of demands to known drug dealers whom they say are complicit in the spate of neglected, abused and abandoned children. The message, stop dealing or face a forced eviction in 48hrs pic.twitter.com/JJKkQYJ54j

She said the effects of drugs in the community were devastating.

“A nine-month-old baby has a blue eye, and a one-month-old baby was burnt with boiling water, and an 83-year-old from Old Eldos was locked up for three days without food for not wanting to hand over her Sassa card. Her son has already dug her grave in the yard. Enough is enough.”

James said their #OperationUpandOut had achieved considerable success so far, with about 30 core members and hundreds waiting to join up.

She said some community members were concerned about the campaign.

“Should we still be worried about where dealers are sleeping when our kids are ‘sleeping’ in the mortuary,” she asked. “We want to call out all other communities around Johannesburg to stand up to drug abuse and reclaim their communities…”

According to Eldorado Park SA Police Service spokesperson Constable Roxanne Gibb: “It’s a constant battle, especially with the minors … they get hooked and end up doing other crimes because they cannot afford their habit. So they steal from their families which is what we witness most of the time”.

Gibb said various cases, ranging from murder to assault, had been reported last weekend and among those arrested was a 17-year-old who allegedly stabbed his 22-year-old brother. He has been charged with murder.