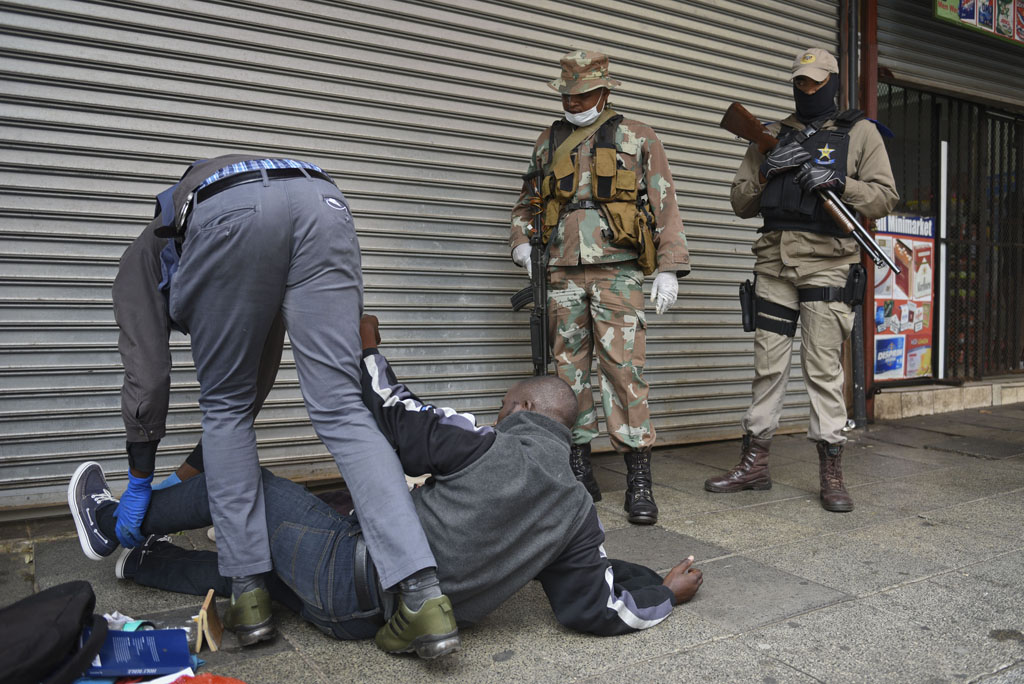 A man is searched after being chased down by members of the South African National Defence Force (SANDF) and the police during a patrol in the Johannesburg CBD, 1 April 2020, during a nationwide lockdown. South Africa's lockdown imposes strict curfews and shutdowns in an attempt to halt the spread of the COVID-19 coronavirus. Picture: Michel Bega

The Independent Police Investigative Directorate (Ipid) has registered six cases of “death as a result of police action” during the first week of the national Covid-19 lockdown, between midnight on 26 March and 2 April, reports GroundUp.

News24 has subsequently reported that the tally is allegedly actually eight, as another two people died in police custody.

Added to the tally of three deaths reported earlier in the week was another death in Gauteng and two in KwaZulu-Natal – the province’s first recorded fatalities allegedly at the hands of the police since the lockdown began. These deaths add to two in the Western Cape, and the alleged murder of a 41-year-old man in Vosloorus, Gauteng, on Sunday. The two deaths in custody allegedly occurred in Limpopo.

In the Vosloorus case, Ipid spokesperson Sontaga Seisa said earlier this week that an officer with Ekurhuleni Metro Police Department and a private security guard had been arrested and charged with murder and attempted murder.

Ipid is the body mandated to investigate criminal complaints against the police service in South Africa.

Among the 39 confirmed cases registered since midnight on 26 March, Ipid is also investigating 13 complaints related to shootings by the police and 14 assault cases.

With the recent circulation online of many videos purporting to show such abuses, there has been increased scrutiny of the methods by which the police and military have enforced lockdown regulations.

Yet, an analysis published by Viewfinder this week drew on data and investigative findings to reveal that exceedingly high levels of brutality have been the norm in South African policing.

Shortly after circulating these statistics to journalists, and after GroundUp had published them, Seisa circulated a second report in the form of a voice note. In this, he said that 12 of the cases were “Covid related” – understood to mean arising from the enforcement of the national lockdown.