The victim says he doesn't understand how thieves could steal R13k from his account within minutes, as he had a limit of R1,500 on his card. 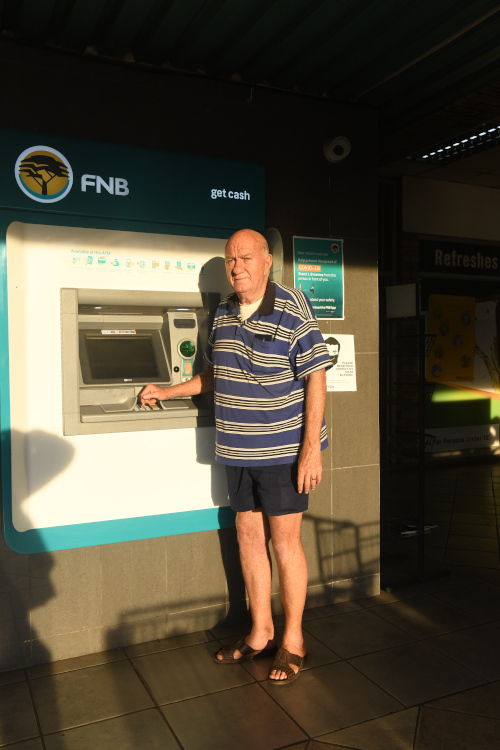 Uncle Stoffel Reynders of Meyerton at the ATM where thugs stole his card. Shortly thereafter, about R13 000 was withdrawn from his bank account in three bursts. Photo: Christiaan Cloete

Just minutes after thieves stole Stoffel Reynders’ bank card at an ATM in the Meyerton city centre, about R13, 000 was withdrawn from his account.

Reynders said he had gone to withdraw money at the ATM in front of Pick n Pay in Meyerton just after 10am on Monday morning, reports Vaal Weekblad.

He says: “I was standing in a queue. The man in front of me used the ATM and when he was done he stood on the corner. When I got to the ATM and pushed my card into the slot, another man came and punched me from the side.

“They got the card and they just left. It was so fast. I was so shocked. I still thought I had the card in my hand after they left,” he says.

According to Reynders, a woman standing behind him confirmed that the thugs had stolen his card.

“The woman told me that she was recently caught with the same scam and that they then stole R7,000 from her account,” he says.

Reynders called the fraud department to stop his card, but unfortunately it was too late.

His bank statements show that the card thieves withdrew money from his account three times within a few minutes.

With the first transaction, an amount of R3,000 was withdrawn from the account at 10:32.

After stopping the card, Reynders went to the bank, where he was told how much money they had withdrawn.

Reynders said he did not understand how this could have happened as he had a limit of R1,500 on his card.

The bank took a statement from him and issued a reference number. He’ll have to wait and see if he can get some of the money back.