Two senior police officers have been tasked to scrutinise the conduct of the SAPS officers in the police station who were on duty that day. 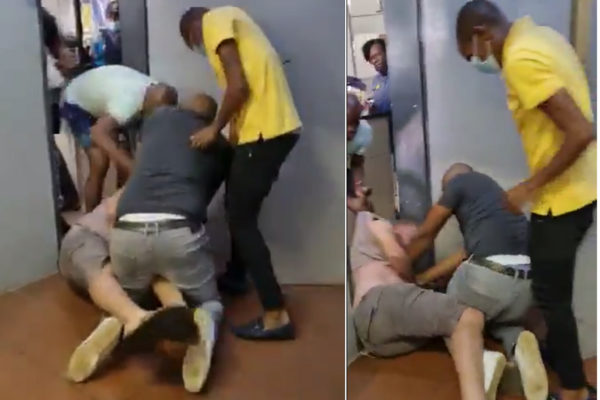 A screengrab of the incident inside the White River police station.

A couple who were allegedly assaulted inside a police station in White River have reached out to civil rights organisation AfriForum for legal aid.

AfriForum legal and risk manager Marnus Kamfer confirmed to The Citizen they will be laying charges against the perpetrators.

The couple were advised by the police service to open a criminal case after a video circulated on social media showing them being assaulted in full view of officers inside the White River police station.

Kamfer said the organisation would also help the couple to submit a charge with the Private Security Industry Regulatory Authority (Psira) against the security officials who allegedly assualted them.

“It looks like those guys are security officials based on evidence from the video,” Kamfer said.

“We will have to first check if the company is registered or not. If they are registered we will then lay a formal complaint because their behaviour is simply unacceptable and against Psira rules of conduct.”

Mpumalanga police provincial spokesperson Leonard Hlathi said the district commissioner of Ehlanzeni, Major-General Dianah Mashele, had urgently established a team of two senior police officers to probe the matter departmentally and to scrutinise the conduct of the SAPS members who were on duty that day.

Kamfer said AfriForum would be closely monitoring that investigation.

“We are grateful the police are looking into that too and that the matter is also under Ipid, but we will be closely following up on that to ensure that justice is served on all fronts.”

Kamfer said that the police in White River had neglected the couple following the alleged assault and refused to open the case.

“Something that further repels AfriForum is the fact that this behaviour took place in the presence of police officials that are supposed to protect citizens. We cannot simply ignore this matter,”  said Kamfer.

Security officers attacked a couple in White River MP. They allegedly tried to force them off the road. And they demanded the footage. @PSiRALive pic.twitter.com/guVshhy4cB