Unconfirmed reports indicate that one person has died during the shooting, and that a firearm was seized. 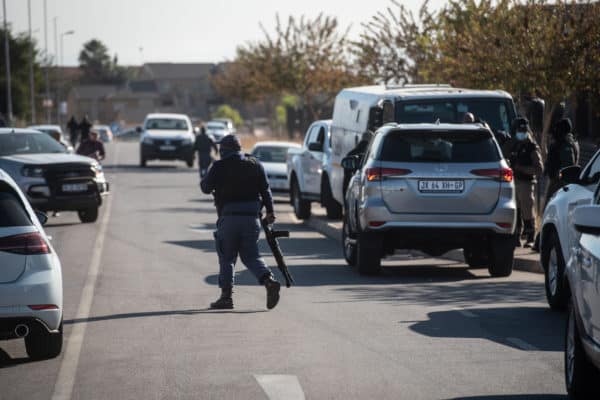 A police officer passing a CIT vehicle near Mall@55 after a CIT heist was foiled by security and police, 1 July 2021, Pretoria. Picture: Jacques Nelles

A shootout ensued between what appeared to be SBV cash guards and suspects in an attempted cash-in-transit (CIT) heist at the Mall@55 in Centurion on Thursday morning.

Unconfirmed reports indicate that one person died during the shooting, and that a firearm was seized. A video of the shooting has since surfaced on social media.

In the video, a guard can be seen loading cash in the cash van, but he quickly closes the door and runs for cover when the shooting starts.

His colleague starts shooting back and the van drives away.

An eyewitness said that one person succumbed to injuries, and that a firearm was found on the scene.

“These guys came in here very early, and they were looking suspicious, they kept asking us when are the store opening etc,” the eyewitness, who did not want to be identified, told The Citizen.

He said gunfire’s started around 8:30AM and a high speed chase continued to the R55 road.

It is not clear if the suspects managed to get the cash.

Cash-in-transit robberies, truck hijackings and commercial crimes have seen a massive rise Gauteng in the past year.

According to crime statistics, there has been an “overwhelming increase in various crimes across the province compared to the previous years”.

These include cash-in-transit robberies, truck hijackings, sexual offences, and commercial crimes that have seen a massive rise in the past years.