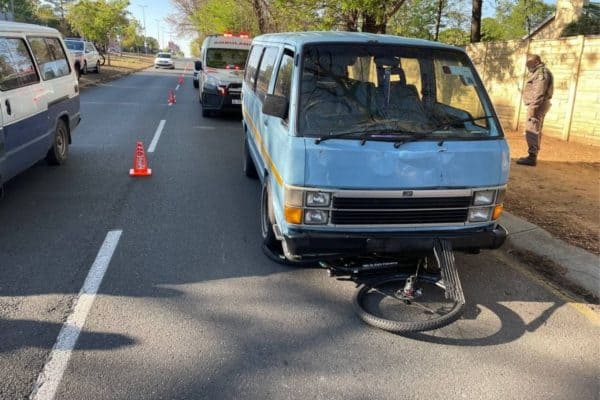 A taxi driver who hit and then dragged a Johannesburg cyclist for half a kilometre under his vehicle allegedly tried to flee the crime scene twice.

A Twitter user posted that the man who was speeding when he hit two cyclists on Sunday morning, first tried to drive away, then ran away before he was caught by a private security company at the scene.

According to a Twitter user, Annee Erasmus the taxi came to a stop opposite her property back wall.

“What they’re not reporting is that the driver tried to drive away, then ran away and was caught by one of the security companies who were first on the scene. Horrific! RIP and condolences to the family.”

It is believed the taxi driver was drunk and speeding through the streets when hit he two cyclists.

One of the cyclists was crushed to death after being hit and dragged for half a kilometre under the minibus taxi.

It was members of the public who flagged him down to stop the vehicle.

Medics who responded to the scene described the accident as so gruesome, that it even shocked them.

They said the 50-year-old man was still trapped underneath the taxi after the vehicle came to a stop.

Fire and Rescue services had to use hydraulic tools to free him.

The second cyclist was treated and stabilised at the scene, before being transported to the hospital.

The taxi driver was unharmed in the incident.

Police have confirmed that he was caught trying to flee by a private security company who were among the first responders.