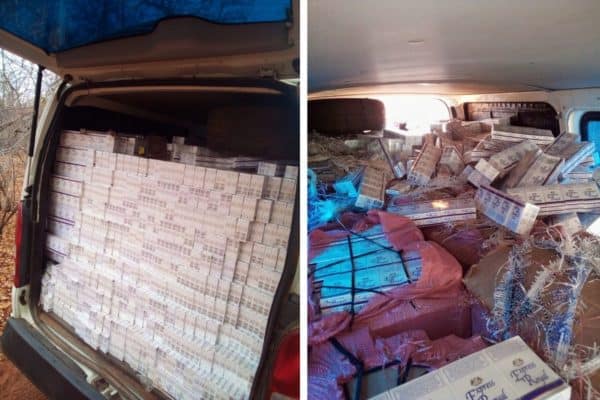 Illegal cigarettes have been seized at the Beitbridge border post and were handed over to the customs officials.

Remington Gold cigarettes to the value of R900,000 were uncovered during a joint operation between the SA National Defence Force (SANDF) and South African Revenue Service (Sars).

No arrests have been made at this time.

“[The team] confiscated illicit Remington Gold cigarettes valued at R898,338. […] The suspects ran back to Zimbabwe.

Other busts this week:

Meanwhile in Limpopo, the SANDF confiscated illegal cigarettes and vehicles worth R1,977,522.00 while conducting a search along the R572 road in Musina on Thursday:

On Wednesday, members deployed in Madimbo Operational Base confiscated a Quantum valued at R150,000 which was carrying Express Royal cigarettes valued at R762,464.

And nine suspects were arrested in Kliprivier, Vereeniging, on Saturday after police seized counterfeit cigarettes worth R6.6 million.

According to police spokesperson Colonel Dimakatso Sello, the suspects were arrested after police were tipped off about suspicious activities happening in Kliprivier.

“Nine suspects were found offloading counterfeit cigarettes from a big truck into smaller trucks. The value of the cigarettes is estimated at a street value of approximately R6.6 million,” Sello said in a statement.

Authorities responsible for looking into the illicit cigarette trade seem to be turning a blind eye.

An investigation into one of the biggest cigarette manufacturers found that British American Tobacco had funded a network of 200 secret informants in southern Africa, including a private security company.