A disturbing video shows nine assailants surround a car in the Joburg CBD and rob the driver of a number of items. 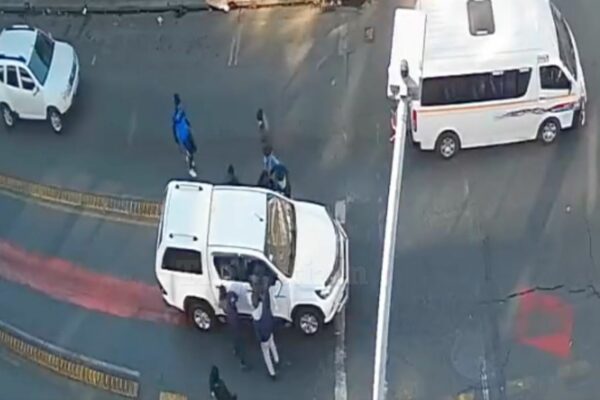 A still from the video showing a robbery in the Joburg CBD | Picture: Screenshot/ Facebook

A video of a smash-and-grab incident that took place at the corner of Market and Mooi streets in the Johannesburg CBD on an undisclosed date has left South Africans in shock about how brazen criminals continue to be.

The video – filmed by FASDA security cameras – starts with a double cab bakkie approaching a traffic light at the same time as a minibus taxi with what seems like pedestrians walking on either side of the street. Before the car has even come to a complete stop, one of the men walking in the roadway beckons to some men up the road who then come running towards the vehicle.

At first count, four men approach. The first one breaks the bakkie’s window while the others surround the car. More men then approach the vehicle from outside the camera’s view.

It is only a matter of seconds before six men are attacking the vehicle as people watch on and pass by in taxis and their own vehicles.

The men attacking the vehicle repeatedly attempt to open the doors and break the rest of the windows as the driver remains still at the traffic light.

The other attackers approach the passenger door while some kind of exchange seems to be taking place between the driver and two of the attackers.

One attacker can be seen taking something out of the vehicle from the driver’s window at the 30-second mark and the driver is then seen reaching for it. The driver then exits the vehicle to pick the unidentified item up as his attackers casually walk away and disperse in different directions of the Joburg CBD.

The driver gets back in his car and drives off before the video plays the incident back from a higher angle, this time showing a total of nine assailants.

The assailants on the back left side of the car are seen taking items out of the back of the car before running off.