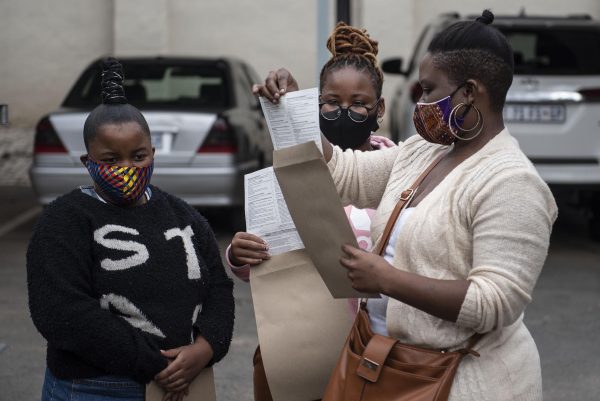 Matriculants from Alexandra Secondary School look at their results, 23 February 2021, in Alexandra. Education Minister Angie Motshekga said she was happy that the class of 2020 had managed to achieve a 76.2% pass rate as she was expecting the worst due to the Covid-19 pandemic. Picture: Michel Bega

Western Cape education minister Debbie Schäfer has been called to order for tweeting misleading information about 2020 matric top achiever Michiel Kühn, who appeared to have been rejected by the University of Cape Town’s (UCT) faculty of health sciences (FHS).

Schafer tweeted: “What exactly does it take to be ‘competitive’?” with an accompanying screenshot of an e-mail from the university which stated: “We have thoroughly assessed your submitted results in the context of the 2021 cohort of applications, [and] we regret to inform you that we are not able to make you an offer for 2021, as your application is not competitive…”

The student, Kühn, was one of the Western Cape’s top achievers in the Class of 2020.

His results and identity were posted on social media over the weekend and went viral. The acceptance letter from the university was not attached.

UCT said they were aware of claims that were made of an applicant who had not been accepted into their medical faculty.

What exactly does it take to be “competitive”????? pic.twitter.com/XLx8lizybY

According to UCT spokesman Elijah Moholola, they had offered the student a place in the university’s medical faculty and he had rejected it.

“UCT has noted claims around an applicant who has not been accepted into the Faculty of Health Sciences.

“UCT categorically states that the applicant received an offer from the university on 23 February, but did not accept it,” the statement read.

Moholola said the student had been contacted telephonically by a senior professor in the health sciences faculty, as part of an effort to recruit talented applicants on Wednesday, 24 February, a day after matric results were released.

“During this conversation, he indicated verbally that he would not be taking up the UCT offer to study medicine as he had accepted an offer to study at another university.”

Many people on Twitter, along with the Good party’s Brett Herron, accused the minister of “race-baiting” and “fuelling fake outrage”.

“Dear @DebbieSchafer & @dhmgibson, you played the race card. The outstanding matriculant couldn’t get into @UCT_news med school because he’s white. Meanwhile the guy was offered a place based on his merit. So did he give you false info? Or you ran with something you didn’t check?” Herron tweeted.

However, while some followers insisted she must apologise and correct her statement, some agreed with her and indicated the university had always been racist and that “being a male Afrikaner puts you at the very bottom of the ranking of victim privileges”.

Schäfer tweeted she was aware of the university’s statement but still felt that “the letter was badly phrased, in that case, which they [the family of the applicant] acknowledge, and which is welcome”.

“UCT has now responded that he was offered a place and did not accept it. Their letter was misleading and they have acknowledged that,” Schäfer added.

Kerry Mauchline, spokeswoman to Schäfer, said the minister is not sorry that she asked the question because the tweet elicited a response from UCT, who, according to her, admitted the letter was misleading and generic and that was something they would work to rectify.

Mauchline said Schäfer had tweeted a question as to how such results could be considered not to be competitive, as stated in the UCT letter.

“[She] was sent the screengrabs by a black colleague who had noted the images doing the rounds on social media and who was outraged that such good results were not considered ‘competitive’. At no point did she mention race.

“She would have asked the same question for any student who was told their application was ‘not competitive’, despite excellent results.

“There was no need to clarify the letter with UCT, as it was by their own admission a letter they had sent,” Mauchline added.