The EFF leader alleges the future is being 'destroyed' by the 'love of T-shirts'. 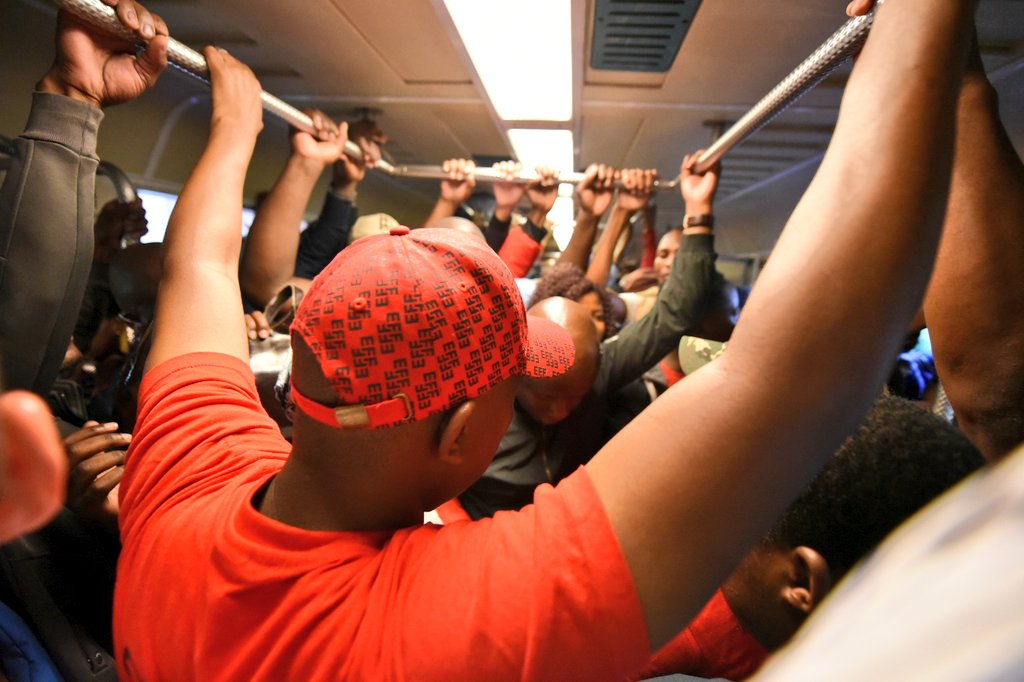 Julius Malema on a train.

EFF leader Julius Malema again urged voters in KwaZulu-Natal on Tuesday to vote for the Economic Freedom Fighters on May 8.

He advised them to stop voting a “tired organisation”, the ANC into power, but instead to vote for one that was young and eager to deliver.

Malema said the time for giving people free T-shirts instead of real change was over.

“You can’t be a young intellectual and depend on T-shirts to vote. You got Mandela’s T-shirt, Mbeki’s T-shirt, and even a butternut (Zuma) T-shirt. These mean nothing.”

He said the ANC was used to issuing people with free T-shirts, which they had been doing since the dawn of democracy.

“They will be coming tomorrow with a lot of T-shirts. When you speak they close your mouth with T-shirts. The future is destroyed by the love of T-shirts.”

The EFF leader, in an attempt to show he was down to earth, took a train ride from the KwaMnyandu train station to eMlazi on Tuesday morning, promising that an EFF government would increase the number of carriages on public transport railways by 50% by 2030.

The party further pledges to expand railways, buy new trains and invest in affordable high-speed trains between Durban and Johannesburg to transport people and goods.

On the same day, President Cyril Ramaphosa was in Malema’s back yard of Limpopo in Seshego at the Ngoako Ramatlhodi Stadium, campaigning for the ANC. He told supporters that those in smaller parties would see for themselves when the ANC regained a majority post elections.

“It is the ANC that will show people that it has the know-how” to run the country, he said. Without naming them, he alluded to the EFF as a “smallanyana party” referring to themselves as a government in waiting, though he suggested that view was deluded and baseless.

ANC President Comrade @CyrilRamaphosa speaks to the elderly of Seshego in Ngoako Ramahlodi Stadium on the ANC plan to service them and to #GrowSouthAfrica #ThumaMina #VoteANC pic.twitter.com/QWBRmWpDlO

Mandatory vaccination: Here are the places business doesn't you to access
52 mins ago
52 mins ago

Mandatory vaccination: Here are the places business doesn't you to access
52 mins ago
52 mins ago