On Sunday, Julius Malema said the EFF is the only party 'not afraid of white people'. 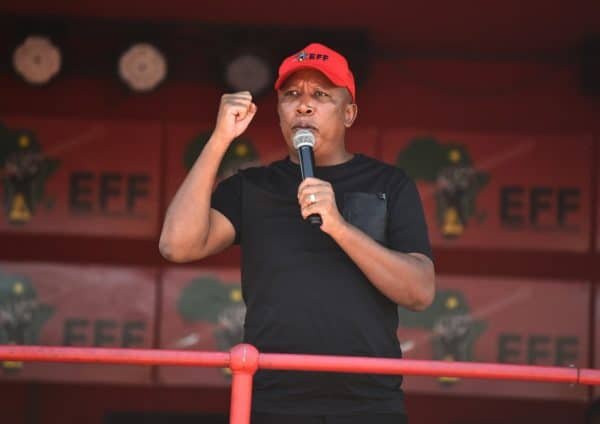 Economic Freedom Fighter (EFF) leader Julius Malema on Sunday took the party’s election campaigning to Thabazimbi, Limpopo, where he said the party wants to “have a meeting with the whites”.

A lesson for white people

Malema said while South Africa is meant to belong to all who live in it, most South Africans “have nothing to show that the land belongs” to them.

He called on supporters to “do the right thing” on 1 November, in order for the EFF to gain control over municipalities in Thabazimbi.

He said once that happens, the party wants to teach while landowners “how to live with people”.

Malema said when the EFF gains control of Thabazimbi, the party will “have a meeting” with white landowners in the region.

The goal of this meeting, Malema explains, is “to say if they want a good relationship with us, they must treat our people well.”

“Our elderly who get Sassa will no longer pay for water and electricity,” he said.

While the African National Congress (ANC) favours compensation for expropriation in some instances, the red berets are adamant there should be no compensation whatsoever.

The EFF’s Floyd Shivambu previously said the ANC’s position on expropriation without compensation would not make any difference to resolving South Africa’s land issue.

“Let us focus on industrialisation because that is the only instrument to bring about real economic development and defeat poverty. […] At the centre of that is the reunification of our people with the land.”

Referring to the ANC, Malema on Sunday said, “the enemy is shaken”. He said the ruling party is “full of corrupt people now, it is no longer that of Mandela”.

“Let the old man rest in peace. Only the EFF can deliver the services”.