While SAA was fined over R4 million for 2017/2018, this was not the highest amount, with Emirates fined R6.9 million for the same period. 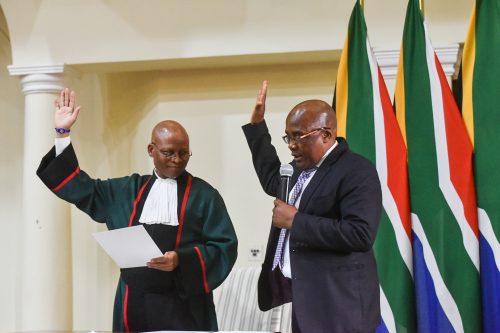 Minister of Home Affairs, Aaron Motsoaledi during the swearing in of the new Presidential Cabinet at the Presidential Guesthouse in Pretoria, 30 May 2019. Picture: Jacques Nelles

The occurrence – which saw the government department charged with enforcing migration regulations fining the national carrier and other airlines for letting visitors into the country without the required valid documentation – came to light in response to a question from Democratic Alliance MP Joseph McGluwa.

SAA is just one of eight airlines that were fined for this in the same period. According to Motsoaledi’s written reply, the fines imposed on SAA more than doubled from R2.1m in the 2016-17 financial year to R4.4m in the 2017—18 financial year.

But SAA is, by no means, the leader of the pack when it comes to the total value in fines. The national carrier is second behind Emirates Airline, which racked up R2.6m in fines during the 2016-17 financial year and R6.9m in the 2017-18 financial year.

Motsoaledi said further detail regarding the fines could not be provided because of “challenges with the revenue management reconciliation mechanism”.

“The Department is engaging the National Treasury with a view to implement improved measures, systems and revenue management and reconciliation mechanism,” said Motsoaledi.

Motsoaledi said no arrangements were made to address the arrears as fines were not regarded as debt.

“National Treasury indicated in a letter dated May 15, 2018 that fines are not regarded as debt or revenue due to the Department since it is not money outstanding in respect of products or services rendered,” he said.

He added that there were no plans to take action against any of the airlines over the arrears in fines.