The MoU, which is the first of its kind in local government, would establish a partnership in the budget planning processes of the government, among others. 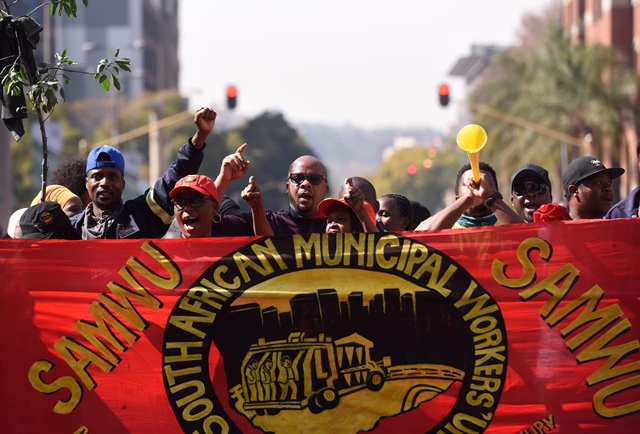 The South African Municipal Workers’ Union has reiterated that workers should be paid their salary increases. Picture: Nigel Sibanda

The City of Johannesburg has signed a memorandum of understanding (MoU) that will ensure an “open door policy” between itself and trade unions representing workers.

The City signed the MoU with the Independent Municipal and Allied Trade Union (Imatu) and South African Municipal Workers’ Union (Samwu) on Monday. This comes after a lekgotla was held last Friday.

In a joint statement, the unions and City said the MoU, which is the first of its kind in the history of local government, would among other things, establish a partnership in the budget planning processes of the government. It would also drive performance management within the City to accelerate service delivery and generate a more conducive working environment for employees to serve residents.

“The multiparty government inherited labour relations in Johannesburg which was fraught with difficulties, tensions and past instances of disruptive strike actions. Our residents have paid the price for this in the past,” the statement read.

Each of the parties involved in the MoU would hold each other to account in a manner that would form a healthy relationship between the government and organised labour, the statement added.

It will also set out the requirements of a labour relations engagement framework, which will provide the mechanisms to achieve stability in labour relations and ensure the City does not recognise unregistered trade unions as per stipulations in the Labour Relations Act.

“Specifically achieving additional steps aimed at resolving issues in dispute before they rise to the level of strike action.”

The City said the MoU, which is now binding, would also require it and organised labour to be accountable for the actions of those they represented, and provide the requisite leadership to prevent breakdowns in labour relations.

In the event that any of the parties breached the signed agreement, the enforcement procedures would require a binding arbitration that would have powers to award costs or necessitate disciplinary action against any City employee, the City added.

“Tribute must be paid to the representatives of the City, Imatu and Samwu for the leadership shown throughout this process.

“It demonstrates how this relationship can go beyond the boundaries of the past and achieve a partnership in service to the delivery of change.”